Dronemaker Parrot Debuts Flower Pot At CES For Some Reason 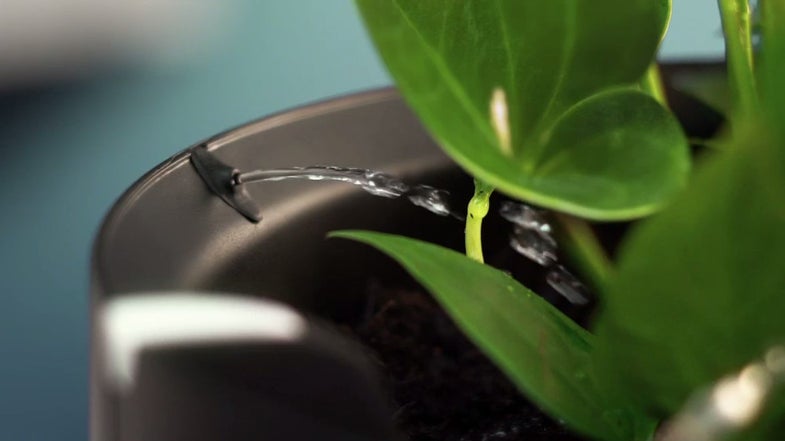 French company Parrot is best known for its small, nimble flying machines. Seen on shelves at Apple stores or stuck in neighborhood parks, the parrot family of drones offer better quality than many toy quadcopters, without the higher cost of being a professional tool. It’s a good niche to carve out in the drone world, but not the only thing Parrot does. Today at the Consumer Electronics Show (CES) in Las Vegas, Parrot unveiled something entirely different: a flowerpot.

Here is a list of things the Parrot POT doesn’t do:

Instead, this non-moving flowerpot is an invitation for gardeners to move even less. Available in slate gray, porcelain, or brick, the pot is almost 12 inches tall, 8 inches in diameter, and weighs a little over 3 pounds. It also holds up to 9 cups of water in its tank, and it can monitor the soil and moisture of the plant inside. Yes, the Parrot POT brings robotic autonomy to tasks like watering a plant.

Parrot POT comes with an app and four modes for fine-tuning how much plant control a user wants. At “perfect drop”, the pot takes care of the plant itself. On “Plant Sitter,” the pot holds up to a month of water and rations it out. With “Expert” a person can adjust the settings in fine detail, and on “Manual” the user presses a button to water the plant and are only alerted if the water tank is empty.

Visions of the future are full of dynamic, dramatic changes, like pocket-sized computers or flying robots. The future is every bit as much about the gradual easing of mundane domestic tasks, from adjusting thermostats to water plants. In that, at least, Parrot POT gives us a vision of tomorrow: One where our plants are taken care of, and our robots aren’t.