A Drone That Flies And Films For You 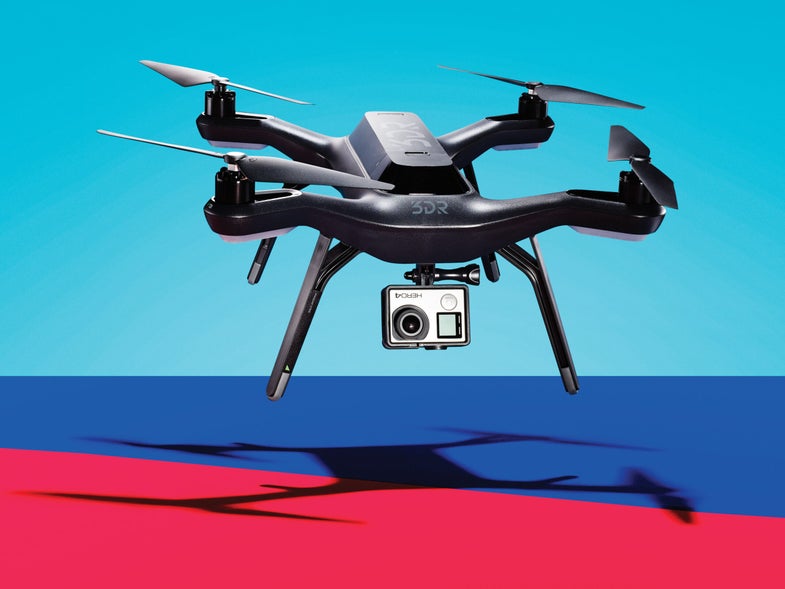 Shooting aerial footage from a drone is tricky. Pilots have to worry about throttle, pitch, yaw, and roll of the drone. When filming, they also need to consider camera focus and gimbal axis. The 3DR Solo Drone automates those chores, leaving you free to take killer shots of any scene.

With more than a dozen presets, the drone can fly in a circle, glide between two points, follow a person on the ground, and loop away from you for a selfie—all from its app and all with the push of a button. It is also the first drone to stream HD video from a GoPro camera, letting you monitor the live feed from any smartphone or tablet.

A gaming-inspired controller, with a trigger at the top of the controller, lets you fly the Solo Drone up to 400 feet (the most allowed by federal regulators). It’s out-of-the-box flyable, so any novice can take professional-looking photos. But the Solo’s biggest advantage—over close competitors like DJI’s Phantom 3—might be its open-source upgrades.

Dronemaker 3DR has opened its app to developers so they can create software hacks and accessories. For instance, a ballistic parachute might be deployed in an emergency (so your drone doesn’t crash back to Earth). Now you just need to find a subject worthy of your Oscar ambitions.

This article was originally published in the October 2015 issue of Popular Science, under the title “A Drone That Flies and Films For You.”