Watch A Drone Land Autonomously On A Car Driving 45 MPH

Where we're going, we don't need our own wheels 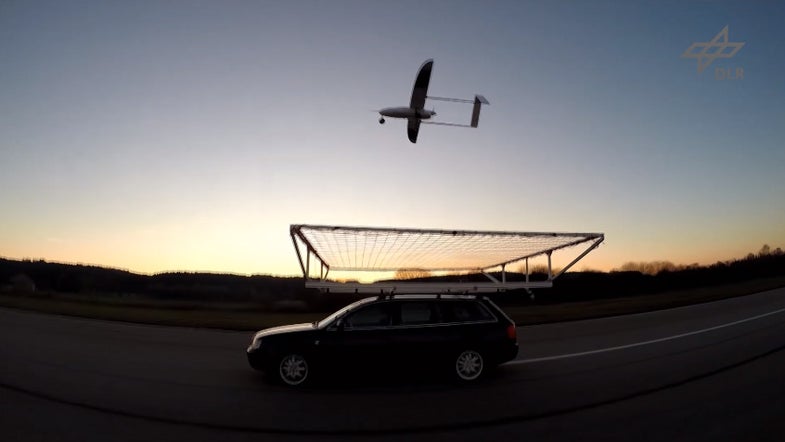 The heavier a given drone is, the less time it can spend flying. The point of a camera-carrying drone like a Penguin-BE is to fly for a long time, its camera watching the ground below. One way to increase flight time is to get rid of parts on the plane, but after a certain point, there’s not much left to remove. The plane needs its camera, engine, wings, and the body that holds it all together. But does it really need its landing gear?

A project by the German Aerospace Center, or DLR, argues that it doesn’t, really, if there’s another way for it to land safely. The system is aimed at ultralight and fragile solar-powered planes. To catch the drone, researchers put a suspended net on top of a car, drove it at 45mph, and waited for the drone to match speed and lock onto target:

The drone’s camera scans a marker that looks a lot like a QR code, and then lowers itself gently into the waiting sky-cradle.

Ta-da! For most drones, like the all-electric Penguin BE which we’re pretty sure is featured in the demonstration, the savings that come with removing landing gear are modest. But for other drones, it could help a lot. Drones like Titan Aerospace’s Solara 50 are designed to fly for not hours but months or even years continuously, so it might make sense to have the landing gear separate from the plane, in the form of a chase team and a car with a special net.

The landing demonstrated is done autonomously, using the existing camera on board the drone, with the human driver having to match the speed of the landing robot. In the future, we could see an automated drone landing on an automated car. DLR writes:

Watch the robot land on the human-driven car below: