Boston-based company Essess is able to analyze thousands of buildings an hour and predict which households are most likely to buy new insulation. 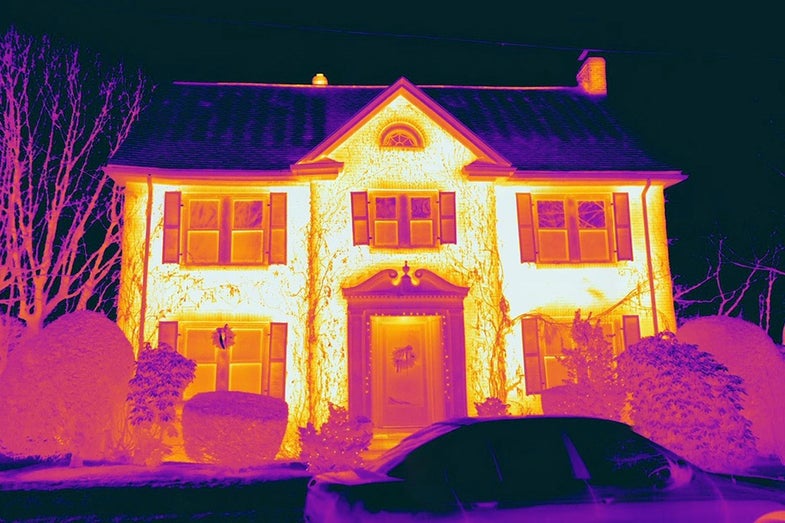 Since 2011, the startup Essess has gazed upon 4 million buildings at night, using its heat-seeking cameras. The cameras attach to the tops of cars, and the company does drive-by assessments of where buildings are leaking heat. For some buildings, the windows may be the culprits. In others, the roof or basement may be a bigger problem. Essess’ latest hardware and software are able to analyze thousands of buildings in an hour.

Armed with these data, Essess advises its clients—cities, schools, the U.S. Department of Defense—on how to fix the leaks. Essess software is able to tailor its advice to a certain budget or timeframe. In one interesting service, Essess uses trend data to tell utility companies not only which utility customers are leaking heat, but which ones are the most likely to do something about it. Essess analyzes data about households across the U.S., including their mortgage payments, their members’ ages, and their utility bills, to figure out who’s most likely to buy new attic insulation, for example. It’s kind of a weird use of predictive data, but ultimately, the results mean energy savings for households and for the environment.

While the concept is simple, Essess’s drive-bys rely on sophisticated technology. For the past several years, researchers at Essess and at MIT have been working to make car-mounted thermal cameras both affordable and high-resolution enough to be useful. Because the Essess camera system uses cheaper, lower-resolution cameras, engineers had to write algorithms to stitch together several captures from the same camera into one higher-resolution image. In addition, the system includes LIDAR to help it figure out the 3-D configuration of what it’s looking at and GPS to map the data automatically. That way, analysts can go back afterward and find which houses to target for fixes.

Essess isn’t the only group that’s thought of thermally imaging houses to save energy. In the winters of 2010-2011 and 2013-2014, the U.K. city of Coventry commissioned a pilot to fly over the city with a thermal camera to check which roofs were leaking heat. The camera was much lower resolution than Essess’, but it was still enough for the city publish a map of hot roofs online for homeowners to check. After the 2010 flyover, Coventry government agencies also used the data to send low-income households with poor insulation offers for new, free or reduced-cost insulation. More than 600 households used their offers.