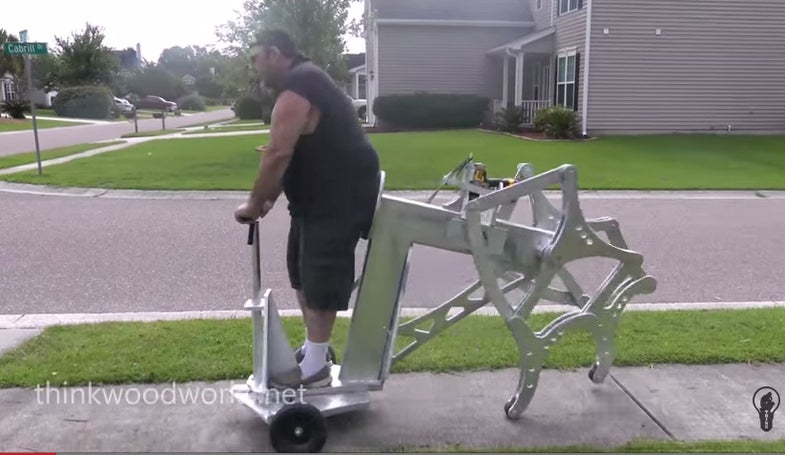 The humble electric hand drill, staple of workbenches everywhere, is more than just a simple tool for carving holes into walls. Put to other uses, it’s a powerful engine, capable of driving all sorts of contraptions. Like this weird drill-powered walking machine by Izzy Swan, that looks like if H.R. Giger had designed the Segway. Watch it move below:

Izzy Swan is inspired, like many other creators of weird walking machines, by the work of Dutch artist Theo Jansen, who makes giant, wind-powered walking sculptures known as Strandbeests. Swan’s vehicle is no idle beachcomber, shambling forward with the breeze. It’s an electric-powered machine.

To make the 20-volt drill drive the legs, Swan used a worm drive. The drill spins a screw-shaped gear, which meshes with a disk gear that in turn gets the legs moving. Despite its metallic appearance, Swan’s odd walker is mostly made of wood that’s painted silver. It shambles slowly, and methodically, like a cyberpunk centaur that’s running low on battery.

Here’s the full video of Swan testing and building the concept. Stay tuned to the end for some drone-captured footage of it walking down a street.