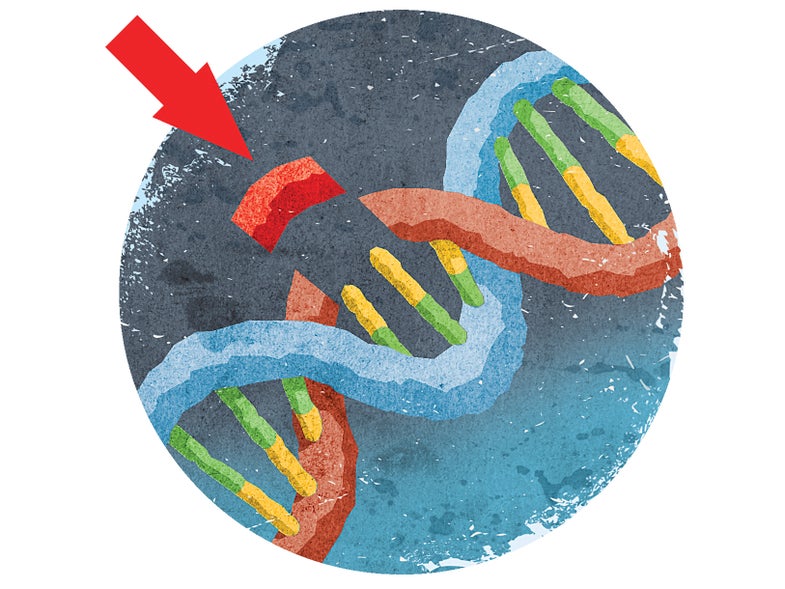 In a study out this week in the journal Science Translational Medicine, a group of British doctors reported that they had successfully “cured” two infants of the blood cancer leukemia using a treatment that involves genetically modified immune cells from a donor.

The study was incredibly small—just two babies—and the infants have only been free of leukemia for 16 and 18 months. Technically, that’s not long enough to say they are cured. Declaring someone who previously had cancer as “cured” usually doesn’t happen until that person has been free of the disease for a few years, at least. But what’s significant about this study is that it combines a promising, novel approach—CAR T cell therapy—with a relatively new gene-editing technique called TALENS, which enables the direct manipulation of genes within a person’s DNA.

In the cancer community, CAR T cell therapy is already touted as a promising immunotherapy treatment (which involves harnessing a person’s immune system to fight cancer on its own), but in preliminary trials, it’s had its limitations. Before it can become a universal cancer treatment, these kinks and logistics need to be worked out. And researchers in the field think that many of them can be solved using gene-editing techniques such as TALENS, the one used in this study, as well as CRISPR, supposedly the easiest such technique to date.

First, what is CAR T-cell treatment?

CAR T, which stands for chimeric antigen receptor T cell, is a new type of cancer treatment which is not yet publicly available, but is in active clinical trials in the United States as well as many other countries such as the United Kingdom and China. The therapy involves removing some T cells (specialized immune cells) from a patient’s blood. Then those cells are genetically altered in a lab, giving them special receptors on their surface called CARs. Once the cells are ready, they are infused back into the patient’s blood, where the new (CAR) receptors seek out tumor cells, attach to them, and kill them.

CAR T-cell trials are currently in phase II clinical trials in the United States. A few drug companies, including Novartis, have plans to make the therapy available as early as this year.

How does gene-editing help?

This new treatment has worked really well for blood cancers like leukemia, especially in young children. The problem, as the researchers point out in their study, is that each set of T cells have to be custom made for each patient. That takes a lot of time, and a lot of money. Further, it’s not always feasible, or even possible, to harvest T cells from leukemia patients who simply don’t have enough healthy ones to begin with.

And that’s where gene-editing comes in. The researchers took T cells from donor recipients and made a total of four genetic changes. The two they made with TALENS enabled the T cells to become universal—allowing them to be used in any person without the risk of rejection (a phenomenon called graft-versus-host disease, where the recipient’s immune system creates such an overwhelming response to the foreign cells that the patient can die as a result). The other genetic alterations added that signature receptor to seek out and attack cancer.

What are the limitations of this study?

The two infants in the study—aged 11 and 18 months—both had an aggressive form of leukemia, and had already been subjected to other treatments like chemotherapy and stem cell transplants. And the fact that they have remained cancer free is extremely promising. But again, the study was small. Further, according to a report in MIT Technology Review, many CAR T experts argue that because the children also received other treatments simultaneously (one had a stem cell transplant soon after receiving the CAR T cells) it’s impossible to know for sure whether the CAR T cells were the sole reason the cancer cells stayed away. “There is a hint of efficacy but no proof,” Stephan Grupp, director of cancer immunotherapy at the Children’s Hospital of Philadelphia, told MIT Tech Review. “It would be great if it works, but that just hasn’t been shown yet.

The combination of CAR T cell immunotherapy with gene-editing remains an incredibly promising area of research. Not only to create a “universal donor” CAR T cell, but also to make the treatment more effective. Researchers at the University of Pennsylvania are currently researching using the the gene-editing technique CRISPR to edit out two genes—called checkpoint inhibitors—that prevent CAR T from working as well as it should. The trial, which could take place this year, would be the first case of a CRISPR-altered cell being used in a human patient in the United States. In November, a Chinese group tested their first CRISPR gene-edited T cells in a patient with lung cancer.

However, it’s important to remember that CAR T cell therapy is in its early stages, and CRISPR/TALEN gene edited CAR T is even newer. There’s still a lot more work to be done, including many, many more studies like this one, with a lot more patients, before it’s available for everyone.