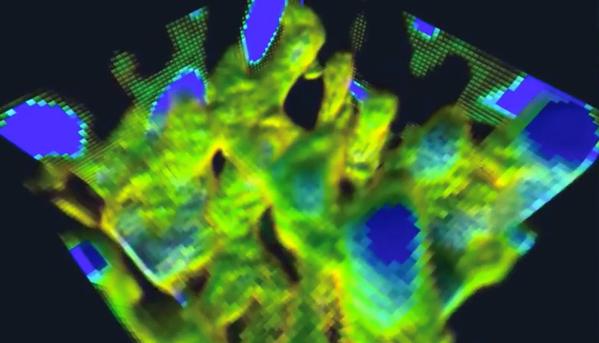 Why should you guess where a Wi-Fi hotspot is when you could view it in color?

A computer scientist has devised a way to build colorful 3D maps of Wi-Fi strength. His keys tools: a color-changing LED light, a laptop, and naturally, a wood mill.

Dominique Thiebaut, a professor at Smith College, stumbled onto this idea by latching an LED light to a battery and a computer chip that measures Wi-Fi power. Then he walked around the room with his contraption. At each spot, the chip communicated the Wi-Fi strength to the laptop. The laptop told the LED what color to shine based on the Wi-Fi strength–red for a weak signal, and blue or green for a powerful one. As he moved, Thiebaut noticed that the colors and signal strength shifted dramatically, even between points directly next to each other.

Next, he used a digital camera to record his movements and the signal strength as he walked around his parents’ cabin and found huge bands of weak spots. However, the resolution of his 3D picture was poor.

Enter the wood mill. Thiebaut attached the LED/Wi-Fi chip to the prong of a CNC wood router, a machine that moves across three dimensions to make intricate carvings and trippy furniture. As the wood mill slid along its runners, it smoothly guided the color-coded Wi-Fi sensor around a room, yielding a 3D map of the signal strength. (In the picture above, weak spots are represented as empty gaps.)

While others have visualized Wi-Fi strength across larger scales, this concept builds hi-res maps of smaller spaces–which should come in handy when you’re watching cat videos at Starbucks.

Want to DIY? Check out Thiebaut’s project on Hackaday.