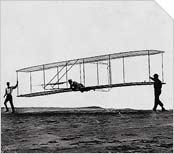 This Saturday at a harbor near Washington, D.C., a team of student engineers is going to shove a homemade flying contraption off a cliff. With their friend inside.

Don’t worry too much. Tommy Fallon, the pilot-to-be, and his four teammates (including his instructor) from Temple University designed their wooden aircraft based on Orville and Wilbur Wright’s 1902 Glider plans. That aircraft flew distances of more than 600 feet and informed the design of the Wright’s motorized Wright Flyer, the first powered airplane to achieve heavier-than-air flight in 1903.

Temple Aeronautics Design and their Wright Glider redux will be one of 29 teams participating in National Red Bull Flugtag, which is an annual contest to fly human-powered aircraft by pushing them off a 30-foot-tall flight deck (and into a body of water).

We stopped by the team’s workshop in Philadelphia to see if they stand a chance of busting Red Bull Flugtag’s current world-record distance of 229 feet.