Video: New Dad Builds a Baby Monitor Out of Lasers and a Wiimote

Preparing for a newborn baby is a lot of work, from buying the bassinet to arranging the diapers. And soldering... 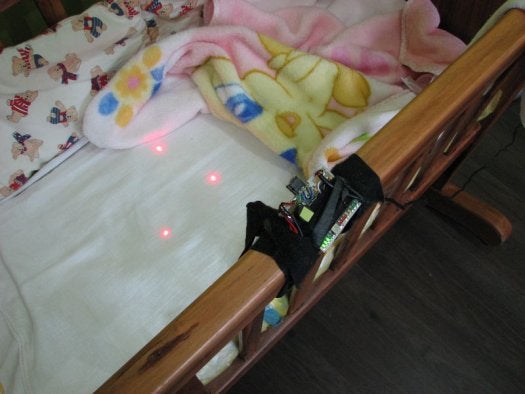 Preparing for a newborn baby is a lot of work, from buying the bassinet to arranging the diapers. And soldering apart the Wiimote, installing the crib lasers and turning on the camera.

A new Hungarian dad, concerned about monitoring his baby’s breathing, did what any modder would do: He built a baby-breathing-tracker. His name is Gjoci and here are his plans.

Other baby trackers use capacitive sensors or microphones, but this one senses motion by triangulating points of light. A Wiimote camera reports the position of the light points, and a microcontroller computes the relative change in motion to indicate breathing. Initially Gjoci planned to use LEDs, but the lights weren’t bright enough and he worried the baby might “gulp the components.” He settled on lasers instead, using 1-MW laser diodes to project four points of light. Newborns don’t move much, so there’s not much danger of the tot moving into the lasers’ path, but he is still searching for a safer alternative.

Meanwhile, the system works beautifully, according to Gjoci’s tests, as you can see below. The camera from a Wiimote reads the location of the light spots, then waits a few milliseconds and measures them again. Gjoci modified some code from a Japanese hacker and his system searches for the difference between the two measurements. Here’s how he explains it on his blog: “If the total difference is higher than the threshold, it effects good conditions. Otherwise no or low movement is detected.” If there’s no motion for 10 seconds, the system sounds an alarm. An LED display shows movement data for each light point.

In two weeks, Gjoci had only a couple false alarms, and the hardware is still working well. Head over to his site for the full schematics.