Despite all the huge advances in medical technology in the past couple centuries, petri dishes, one of the most crucial... 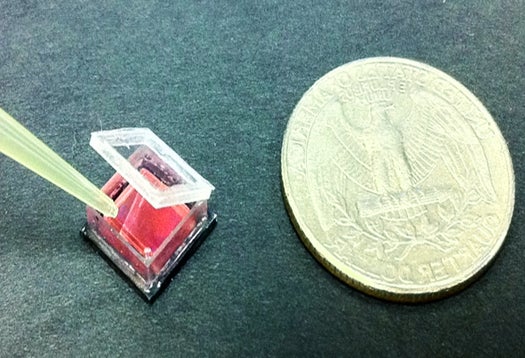 Despite all the huge advances in medical technology in the past couple centuries, petri dishes, one of the most crucial pieces of equipment, haven’t changed much at all. Now a grad student at Caltech has finally brought these flat-bottomed bowls into the 21st century.

The new device, dubbed ePetri, uses an imaging chip from a mobile phone camera, a smartphone and Lego blocks. The imaging chip acts as the petri dish in the traditional sense, holding the cell culture beneath a sheet of protective plastic. The square chip is placed inside a platform made of Legos, and an Android phone hooks in place on top. The phone’s LED screen is used as a scanning light source, illuminating the image sensor.

The whole thing goes inside an incubator, and a cable connects to a computer outside, which reads the image sensor. This allows researchers to watch cell growth in real time — no extra cell transport, pipetting or external microscopes required. Watch a video below to see how well the system works.

Cell culture involves lots of cell transport, moving from incubators to microscope plates and back again. The process is time-consuming and laborious, so any processes that can automate cell culture would be a welcome advance. It also cuts down on contamination risks, explains Guoan Zheng, an electrical engineering grad student and lead author of the paper describing the ePetri.

The ePetri allows wide-field images of confluent cells, which are cells that grow tightly together. Other Caltech scientists have already put it to the test, according to a news release from the university: Biologist Michael Elowitz used it to observe embryonic stem cells. Stem cells differentiate in different ways, so a biologist looking through a microscope would only be looking at one small group, akin to wearing blinders. But the ePetri let Elowitz study stem cells on the entire device.

“It radically re-conceives the whole idea of what a light microscope is,” he said.

The team believes the ePetri could be used for labs-on-a-chip or other portable diagnostic devices, according to Caltech. Zheng and colleagues are working on a new self-contained version that includes a small incubator, which would be useful for diagnostic tests that would not require sending samples out to a lab.

The ePetri is described in the online version of the Proceedings of the National Academy of Sciences.