Easton LaChappelle, a high school sophomore from Colorado, built a wireless animatronic hand and entered it into his local science... 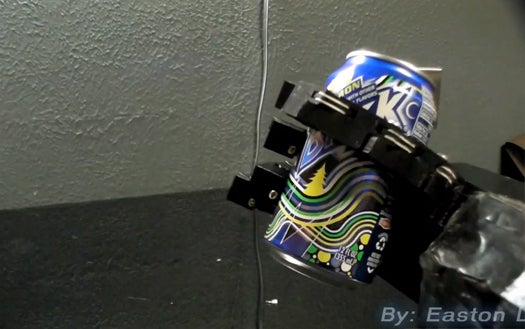 Easton LaChappelle, a high school sophomore from Colorado, built a wireless animatronic hand and entered it into his local science fair. He won first place with the device, which he controls with a glove worn on his hand. The animatronic hand mimics the gloved hand’s finger movements in real time to pick up objects. After the local fair, LaChappelle took his invention to the regional and then the state fair, where he won third place.

LaChappelle designed the outer shell with a CAD program and fashioned it with paper and fiberglass. The hand itself was 3D printed by Jeremy Blum. Six servos control the hand’s movement – one for each finger, and an extra for lateral thumb movement. The servos are hooked up to an Arduino (an open source prototyping platform for electronics) as are flex sensors on the control glove. When the wearer moves their fingers, fishing line pulls each robotic finger to flex it.

Watch LaChappelle pick up pop cans, tennis balls and more with the second-generation hand (and shake hands with himself) in the video below: