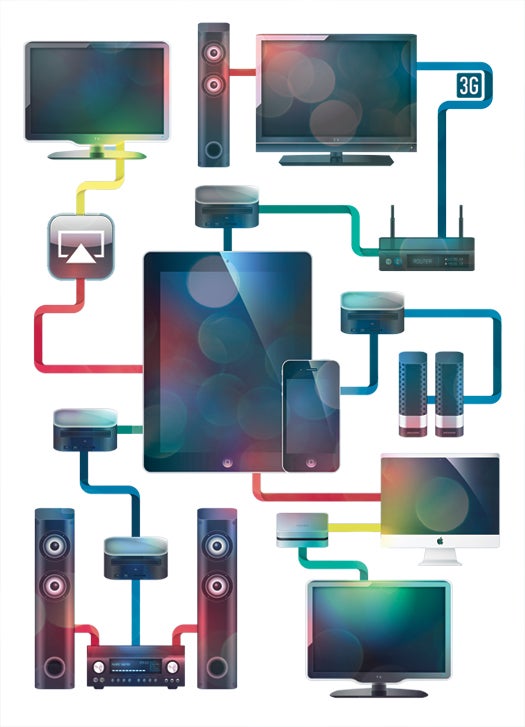 One of the great features of Apple devices is AirPlay, the technology that enables them to wirelessly stream media to one another. The company has also set out to enable a growing range of other equipment, such as A/V receivers and speaker docks, to get content from your iTunes library simply by being near your computer or iOS device. Still, AirPlay has some Apple-imposed limitations, including the required use of iTunes and a relatively small pool of supported third-party devices. Recently, several tricks have been developed to extend AirPlay’s functionality, letting you stream music and video to and from more places.

Easy: Send Video To Your Mac

One of AirPlay’s major shortcomings is its inability to sling content to a Mac. A free app, AirPlayer, solves that problem by transforming your iPad, iPod Touch or iPhone into a video transmitter and allowing them to wirelessly stream iTunes clips to your Mac so you can watch on a bigger screen. The program works its magic by imitating the Apple TV’s connection protocols. Note: This is not to be confused with another app called AirPlayer, which sells for $5 in the iTunes store.

With the free content-management application Plex Media Center installed on your computer, the new Plex 1.1 iOS app ($4.99 on iTunes) lets you search through all your media (not just iTunes content) with your iPhone or iPad, stream it over 3G, and channel it to a friend’s HDTV via experimental AirPlay support. You’ll need to enable a setting on your router known as port forwarding to connect devices outside of your local network; for instructions, head to wiki.plexapp.com. Note that purchased videos with digital rights management (DRM) controls cannot be streamed.

Advanced: Stream To Any Device

The biggest difficulty with AirPlay is having to buy hardware that supports it. ShairPort lets you keep your current gear. The software can be installed onto any PC, allowing any device to take advantage of AirPlay streaming. For now, this allows only streaming to third-party software, so you’ll need a second computer to act as a go-between. For example, you could use your primary computer to stream music to the free VLC mediaplayer software running on a home-theater PC, and then from VLC to an A/V receiver. You can get the ShairPort code free at mafipulation.org, but fair warning—using it may void your equipment’s warranties.