Zips across lakes and rivers at 25 mph 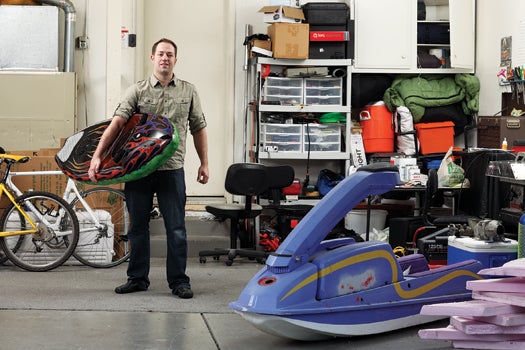 When Jason Woods was 19 and living on his own for the first time, he decided to buy an old ski boat. The 1969 Sportster was perfect for driving girls around Lake Berryessa, near his home in Napa, California, but after a few months, he found that transporting and storing a 16-foot boat was an expensive hassle. He wanted a craft that he could toss in his car and carry to the water. Unfortunately, no options existed.

So Woods-who, at Napa’s New Technology High School, learned how make his own rockets and build battle-ready robots-came upwith the idea for the Kymera. The concept was a carbon-fiber body board powered by a small engine that would propel a rider at exhilarating speeds while displacing roughly half an inch of water. Vacationers could explore waterways without a boat, and because the Kymera would weigh only 35 pounds, one person could haul it to the water.

The difficulty, in a world of 600-pound Jet Skis, was tracking down lightweight parts. Woods eventually found the solution when he clicked his way into a subculture of German R/C-boat enthusiasts. Through various websites, he discovered that “they like to build eight-foot-long, 20-horsepower mini yachts”—and there are many companies that produce components for them. He bought a miniature jet pump from one of the companies for $500. 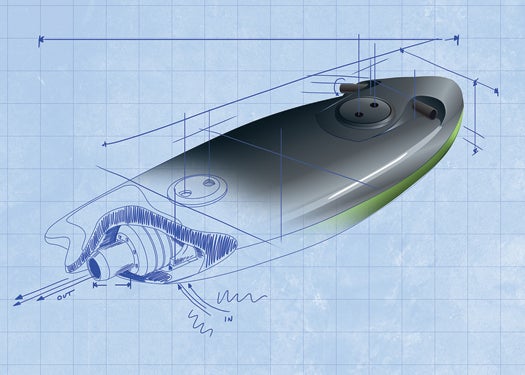 How It Works: Motorized Body Board

A two-stroke gas engine drives a lightweight, high-volume jet pump, which expels water to create thrust and which diverts a small amount of water to cool the engine. The Kymera displaces less than an inch of water and travels up to 15 mph.

With the parts in hand, Woods split an off-the-rack kneeboard along its waterline, mounted the jet pump, a 26cc engine and a starter from an R/C plane, and duct-taped the housing back together. It coughed and choked, but it moved, and soon Woods was building a new version every year or so, tinkering with steering and propulsion configurations, moving the exhaust below the waterline, and trying to find the right balance of torque and water volume in the pump.

His fourth rebuild [pictured above] puts out 5 horsepower and gets up to 15 mph. It also incorporates carbon fiber and handlebars. Button-controlled servos move the jet pump back and forth, but steering is mostly a matter of leaning from side to side. When the rider cuts the throttle, the Kymera drifts to a stop.The next model, under construction now, will use a hybrid electric-propane four-stroke engine and reach 25 mph. “I’m already getting e-mails from guys who want to do whitewater with it,” he says. “I’ve proved the concept; now I want to find the extreme. The final version will fall in between.”

Woods estimates that with mass-produced parts, a basic model could retail for $1,000. But he says it’s not the market potential that keeps him going. It’s the idea that everyday people would finally have their own way of getting out on the water. “What would make it worth it,” he says, “is just seeing it on the roof of someone’s car, headed for the lake.”