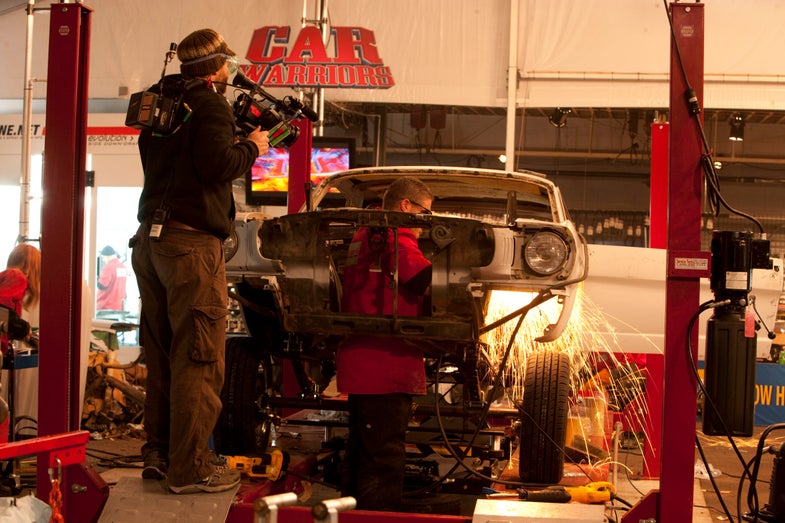 Automotive restoration is more than just fixing a few dents, tuning up an engine and slapping on a coat of paint. To some, a good resto job is akin to fighting a battle – devise a strategy, gather your armies and go to war.

If you don’t think so, just ask the guys over at the SPEED’s new show, Car Warriors , which pits two teams against each other to build to best show car in 72-hours flat. The Car Warriors 72-hour format started us thinking about what we would do with our own cars in the allotted time.

Naturally, the first thing that came to mind was adding power, power and more power. But power, like most things in life, is elusive and we were left wondering how do you get it and at what cost? One of the most cost effective and reliable ways of delivering more power for your car is by installing a turbocharger.

While a turbocharger may seem like a daunting install, if you plan methodically, do your research and have the right tools, it’s a lot easier and less time consuming than you may have first thought. But you’re going to need a few things before you get started on your road to power.

First off – and this is key – do your research. Before you turn that first wrench, make sure that your car can handle the extra power and we’re not just talking about the engine. Check and double check that the engine, exhaust and the car on a whole can handle the added power.

Once you’ve decided on which turbocharger is right for your make and model, make sure you have all the right tools and parts. Getting stuck in the middle of a mess of parts when a bushing is missing or a hose doesn’t fit turns a simple two-hour job turn into a weeklong slog.

Like carpentry, measure twice and cut once because getting stranded on the side of the road is just as unpleasant in a fast car as it is in a slow one. That said, most turbocharger kits come with everything that you’d need, like hoses and fittings, an intercooler, a pre-programmed ECU, blow-off valve and of course, the turbocharger itself.

While you’re already under the hood, we recommend upgrading your engine’s intake manifold, air intake system and exhaust system, if you can. These systems work in conjunction with one another, so upgrading all of them at the same time creates both performance and reliability. It may add to the cost and build time, but like the old saying goes, an ounce of prevention is worth a pound of cure.

Now comes the install, go slow, check your work and then double-check it again. 72-hours is more than enough time for the turbocharger installation. Once you’re finished, start the car and let it run at idle for a couple minutes to ensure everything is working properly. It may sound funny, but we like to listen to our cars. Now comes the best part, take her out and have a little fun, because you’re one step closer to getting your own show on SPEED.