One of the fundamental joys of the Kinect is lifting one arm, then the other, and seeing the movement mirrored... 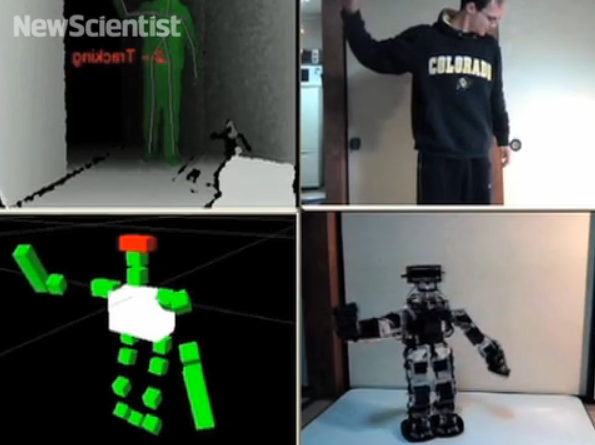 One of the fundamental joys of the Kinect is lifting one arm, then the other, and seeing the movement mirrored by your on-screen avatar. Know what’s even cooler than that? Seeing your movements mirrored by an actual physical robot.

Developer Taylor Veltrop is still fairly early in the project, but the response is really impressive already. He’s used the Kinect to recognize his movements, translate them to commands, and have them carried out by a connected miniature humanoid robot. So far, the robot can only recognize arm movement (apparently the elbow, shoulder, and wrist joints specifically), but Veltrop will continue to work on it. He intends to add leg support and gripper (hand) support, which shouldn’t be too difficult given an adequately virile robot.

Like the Kinect-as-surgical-equipment hack and a few others, what’s great about this hack is how it gives the capabilities of incredibly expensive equipment to everyone with $150 and a little time. There are some crazy implications, of course–remote-controlled robots with a much more delicate and tactile touch than those controlled with a computer or remote control could be used in situations from medicine to the military–but really, we just want a tiny robot to duplicate our perfected Soulja Boy dance from Dance Central.