You remember the Chumby–it’s that cute little Wi-Fi device designed to constantly stream a greatest-hits lineup of your favorite Web... 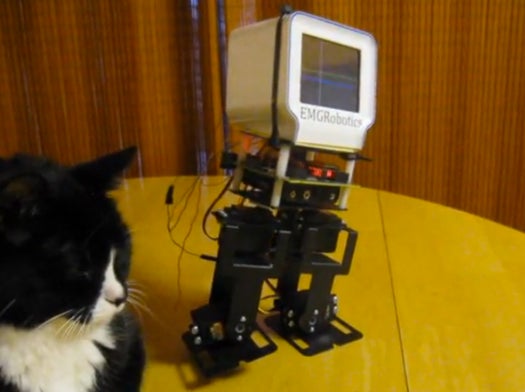 You remember the Chumby–it’s that cute little Wi-Fi device designed to constantly stream a greatest-hits lineup of your favorite Web apps to places where your laptop, netbook, or smartphone can’t go. The Chumby on its own makes for a cute alarm clock, but this DIY upgrade for the tiny media display is really going places. (Ha!)

The Chumby as it was intended is a sort of amorphous widget device, giving the user access to all the expected apps (Pandora, New York Times headlines, news, email, Twitter, Facebook). It can’t really do much that any modern smartphone can’t, but it is extremely cheap ($120 for the Chumby One, used in this hack) and has lots of fun features to play around with (including an accelerometer, touch screen, and Wi-Fi). Built on Linux, it’s eminently hackable, and there’ve been all kinds of Chumby-based mods. But this is the first time we’ve seen one that’s able to flee its creator (and a suspiciously apathetic cat).

This thorough DIY video describes in schematic detail how to outfit a Chumby with a few servos, a robot sensor board, and some walking software installed directly to the Chumby itself to create a robot that really can go where your smartphone can’t – under its own power. Sure, it walks more like Frankenstein’s monster than anything else, but it’s walking, and that’s the important thing.

The uses for a walking Chumby are myriad–you could freak out household pets, or set it to run away after its alarm goes off, or…okay, fine, that’s about it. The video: