Pretty amazing stuff from the DIY UAV world: robotics researchers at the University of Tübingen in Germany have created a... 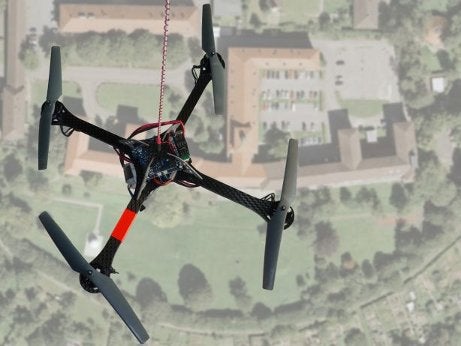 Pretty amazing stuff from the DIY UAV world: robotics researchers at the University of Tübingen in Germany have created a small, fully autonomous helicopter that can track and land on a moving target–a simulated aircraft carrier landing pad mounted on the back of another robot–tracking its LED runway lights with a Wiimote’s infrared camera.

It’s an interesting demo of what can be done with ultra-cheap, consumer-level parts. Reading the info from the harvested Wii IR sensor, as well as onboard accelerometers monitoring the orientation of the copter, is an onboard Atmega microprocessor. Software analyzes the orientation and intensity of four LEDs on the landing pad, then regulates the four electric motors to guide it in for a soft touchdown.

The team is also working on a similar copterbot that uses photos from a mobile cameraphone to navigate open, outdoor spaces by comparing live images from the phone with a database of the surroundings.

[Universität Tübingen via Hack a Day]