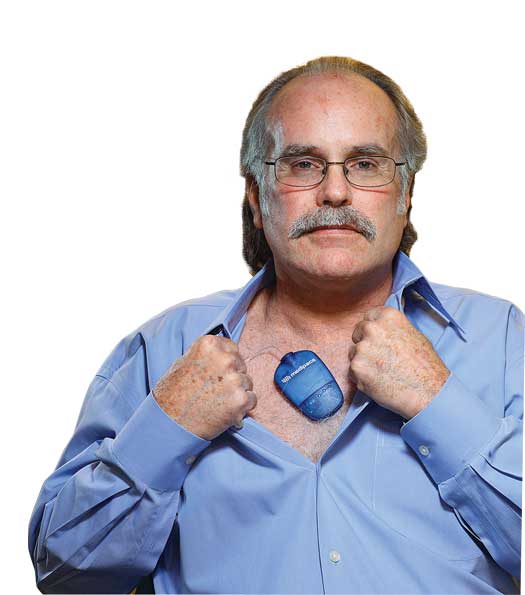 Injecting hospital patients with medications is fraught with difficulties—with nurses filling hundreds of orders daily, delays and miscalculations are inevitable and costly. Mark Banister recognized the financial rewards of a solution that his business partner estimates could save $1 billion annually, and set out to design a disposable infusion drug pump to improve on mistake-prone IVs and complex mechanical pumps. Now he’s about to start the process of getting FDA approval on his Mini Infuser, a device that drastically reduces room for human error by using a polymer he created to deliver correct dosages.

Banister’s invention is the only disposable pump that can be programmed to dispense drugs continuously. The pocket-sized plastic device attaches to a patient’s chest (typically with tape) and administers several types of drugs, such as insulin and painkillers, controlling dosage through an expandable epoxy polymer. A microprocessor inside the pump sends dosage information to the polymer, which expands and displaces the drug out of a reservoir. Future generations of the device will dispense multiple medications at once and come prepackaged with the right amount of drugs.

Banister, 54, a former motorcycle-exhaust-pipe manufacturer, stumbled upon the idea of expandable polymers while researching a different invention. He read textbooks about polymer chemistry in his garage in Tucson, Arizona, and experimented with materials like polyethylene glycols and polyether amines. The epoxy polymer he came up with can now expand to 500 percent its original size.

The polymer receives dosage information from a microprocessor, and then expands to dispense the proper amount of the medication.

In 2004 Banister began working with the tech incubator Arizona Center for Innovation, which helped him find money and technical help. His team found that they could make the material swell at different rates by manipulating the pH of the fluid around the polymer. That allows the pump to work slowly and evenly for a walking epidural, for example, or to be programmed for faster delivery at mealtimes for an insulin dose. Numerous other adjustments are also possible. “It’s very precise,” says Walter Bochenko, a medical-device technical consultant. “It will open doors for new and innovative drug therapies.”