The wiring in many classic cars is more likely to be a fire trap than a masterpiece of industrial control.... 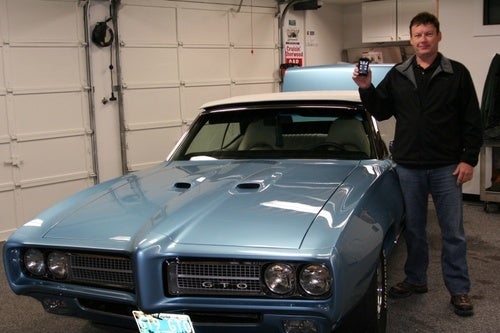 The wiring in many classic cars is more likely to be a fire trap than a masterpiece of industrial control. Not so with Dave Phipps’ 1969 GTO, which he controls remotely with an iPod Touch.

The RedEye is a hardware and software solution that allows a iPhone or an iPod Touch to work as a universal remote control. The iPhone/iPod communicates with the RedEye over a wifi network and the RedEye, in turn, relays commands to things like TVs and VCRs over an infrared link.

Dave Phipps took the “universal” part literally and set to work using the RedEye and his iPod Touch to build a remote control for his Goat. The RedEye is interfaced with the control system for the car, also of Dave’s design, operating some things through wired links to the RedEye and others through infrared links as per the RedEye’s typical usage. As he demonstrates in the video, he can put the windows and roof up and down, control the stereo, and apparently even scare passers-by as he starts and revs the engine from outside the car.

For a man who has apparently implemented several versions of electronic control for his car over the years, it should come as no surprise that Rush is playing when he turns on the stereo.