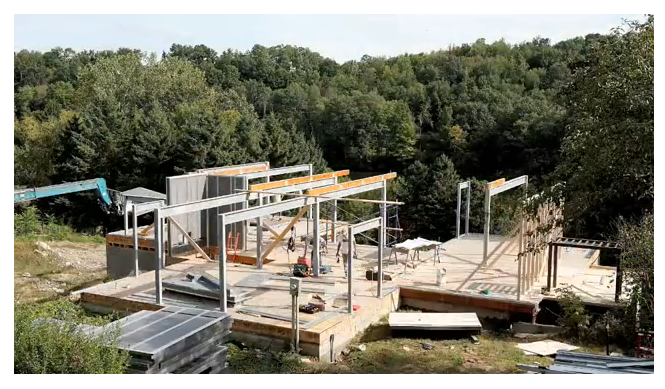 If you’re building a house using brand new technology and it seems like you’re spending a lot of “build” time standing, staring and walking in circles, I have some advice for you: don’t mount a camera above the scene to capture exactly how much time nothing is in fact being built. I’m a photographer, so it seemed like a good idea to mount a Canon 1DS Mk II with a Canon TC80N3–remote controller to make a picture every eight minutes, eight hours a day, for 14 days. During the build I never reviewed the pictures; I just changed out the CF cards and backed them up. Today I converted all the RAW files to 1080 jpegs and threw them onto a video edit timeline, giving them .3 seconds each. Then I hit play.

This time lapse represents “the box:” installing the stair tower deck (wood), third-floor deck (wood), second-floor exterior / interior walls (Kama Eebs panels), third-floor exterior / interior walls and the roof (panels). As I stared at the screen, all the emotions came back. I watched the leaves on the trees go from green to gone. And in a similarly soul-wrenching way, I saw full hours of nothing: just a bunch of hard-working guys waiting for a part, a missing link, something to get the job back on track. Fortunately I also saw incredible focus and teamwork. I noticed that I wore the same pants for five days in a row. I was able to count my coffee intake (29 cups). But I figured that nobody else wants to watch a static build, so I went in and deleted every frame that was a “dwell” moment. It turned out that I had 52 hours of “dwell” time out of 112 hours of action.

The perceived rate of the build was faster than it appeared when I was inside the project day to day. If nothing else, I’ve learned to slow down, worry less and perhaps do my laundry more often…