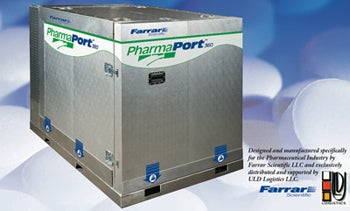 A new refrigerated cargo box for moving pharmaceutical products has attracted the likes of delivery giant UPS, but its inventor may go out of business first because of a lengthy review process by the Federal Aviation Administration (FAA).

The Columbus Dispatch brings the story of Scott Farrar, owner of the small Ohio company Farrar Scientific. His reinvented “PharmaPort” cargo box uses a “passive” technology to keep drugs and other products at a constant temperature, and can fit anywhere on a cargo plane. Small battery-run fans help circulate air within the boxes, rather than the usual “active” compressors or heaters

Trade show appearances created a buzz among shipping companies, and UPS has already expressed interest and run Farrar’s invention through a series of tests. But the FAA could not decide whether the invention counted as a “passive” system, and has now decided to write an entirely new policy for the invention. That means Farrar faces a waiting time possibly as long as three more years, on top of almost a year spent talking with the FAA.

That delay could mean life or death for the small company that is already down to seven employees from a high of 17. Farrar says that he would immediately hire up to 25 employees upon getting FAA approval, and in time could employ up to 150 people.

We, of course, love to recognize such local inventions during its annual Inventions Awards, and we even follow up on our winners’ latest activities. So it’s a bit heartbreaking to see when an invention that appears technologically and commercially sound might falter in the final stages of a regulatory process.

Farrar plans to meet with FAA officials in Washington this month to try and persuade them to ditch the new policy approach, and he has also gained some support from Ohio senator Sherrod Brown. We’ll keep our fingers crossed.