An easy way to send a TV signal anywhere 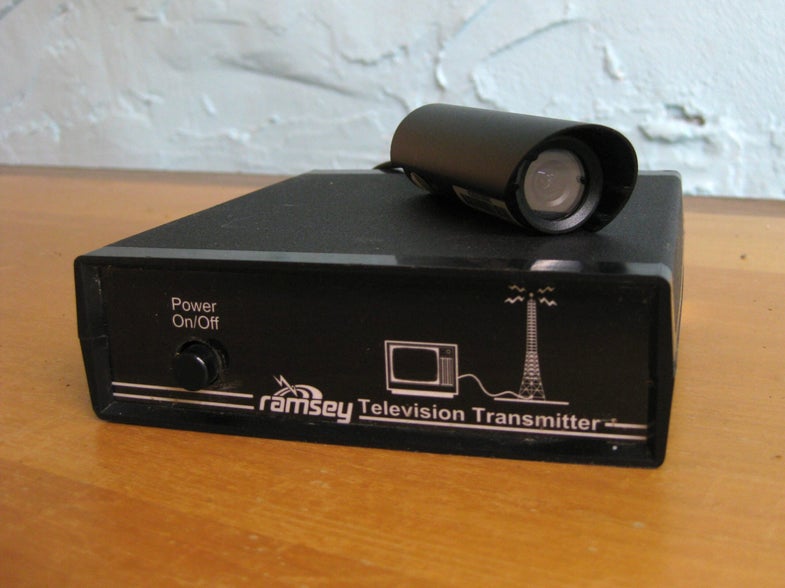 If you were anything like I was as a kid, you’ll remember fondly the time spent soldering electronics kits. In recent years, I’ve been busy building things like pink camouflage tanks, and have mostly missed the recent electronic-kit resurgence. That is, until I had the need to broadcast live video images from the cockpit of a recent project to TV screens piled around the arena, and rediscovered an awesome kit source.

An internet search reintroduced me to the venerable Ramsey Electronics. The Web site brought a smile to my face with things like a DTMF decoder and relay board, broadcast-quality FM transmitters and, to my delight, a short-range TV-transmitter kit, the TV6C. The kit cost $39.95 and arrived quickly. The quality was good—great, actually, as compared to many of the things I’ve seen imported from Hong Kong with untranslated instructions. The only issue was that both of the kits I ordered came with an extra capacitor of around 22 uF and were short one resistor of around 22 kOhm. Fortunately, I actually have a parts drawer with spare 22kOhm resistors in it.

Building the kit was one thing. Trying (and failing) to test it and our bodies to destruction was quite another. While the video quality was never spectacular, the transmitters managed to hold their tuning and to hold together despite being completely pummeled. Video from the lipstick cameras aimed at our bouncing helmeted heads broadcast continually to the TV monitors in the audience. The external antennas we used did not survive, but none of the abuse was able to destroy the transmitters themselves.

(If it sounds like I’m being cagey about the project for which we used these transmitters, it’s because I am. It isn’t quite ready to release yet, but keep an eye out for it soon.)

Mail order electronics kits have come an awfully long way in recent years and now offer the ability to add really useful, significant functionality to projects. Without even considering the rest of the vast array of kits on the market today, think about the possibilities of just an easy to build, affordable TV-transmitter kit. And with the digital-TV switchover, piles of free TV monitors are there for the asking.

Now I’m looking at the ICI1C – Infra-Red Switch Control Interface Kit. Is anyone else getting ideas for using some kits as a component in an upcoming project? Tell us about it in the comments.