A fascinating and weird DIY scene grows in Brooklyn. See the video 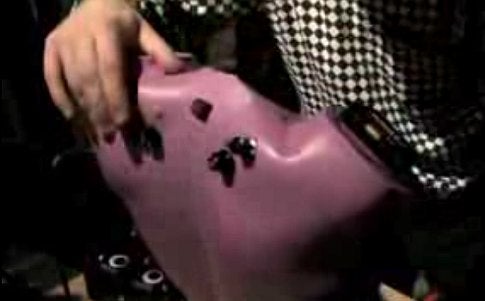 Enter the Bushwick artists’ co-op 3rd Ward between 7:30 and 10:30 pm on the third Thursday of the month, and you’ll be greeted with a cacophony of strange ambient digital sounds, a crowd of enthusiastic geek-hipsters, and free PBR. Welcome to the wonderful world of DIY digital music.

Handmade Music Night, a collaboration between Make Magazine, Etsy, and createdigitalmusic.com, is an open invitation for those who spend their free time tinkering with electronic music-making gadgets to showcase their latest projects.

Last Thursday’s event had the air of an interactive science fair, and while some attendees sat in the corner drinking, chatting, and soaking in the sounds, most crowded around the projects for demonstrations and the chance to take the controllers and make a little music of their own. While there were only five participants, the event drew around a hundred people, according to organizers (although the promise of free beer probably didn’t hurt the turnout).

Among the projects was the Gestural Controller Exploration 2 (GCe2), a digital music controller that resembles a coconut with buttons, created by Matt Bethancourt of Mouse and the Billionaire.

The GCe2 takes the scales from a piano, but rearranges how each key is played. For example, rather than hitting middle C on a piano keyboard and jumping up eight keys for the C in the next octave, the GCe2 gives the same effect with the press of a button and a tilt of the controller to the right. According to Bethancourt, this creates a counterintuitive way to play each note, which allows for more spontaneous, ambient sounds (see video below for demonstration).

Another project was inspired by the theremin, an electronic instrument made with radio frequency oscillators and invented in the 1920s that has appeared in such wide-ranging work as surf rock and horror movie soundtracks (want to build your own?). While traditional theremins don’t rely on physical contact to make sounds, Richie Brown’s Torso Theremin incorporates both touch and light sensors on a shocking purple mannequin torso (see video).

The mannequin’s chest is fitted with two metal doorknobs, and the touch of a hand affects the pitch. The back of the mannequin has two light sensors that work on a similar principle: as a source of light (like the flashlight in the video) nears the light sensors, the pitch increases.

According to Peter Kirn, editor-in-chief and publisher of createdigitalmusic.com, Handmade Music Night helps connect people who are interested in making digital music but who don’t necessarily have access to music institutions or some of the underground music scenes that are more difficult to infiltrate.

For more information, visit 3rdward.com/handmademusic, and contact Peter Kirn to sign up to show off your own project at the next Handmade Music Night.