We Have a Winner

Announcing the Build-a-BUG Challenge winners. Thanks to all who entered! 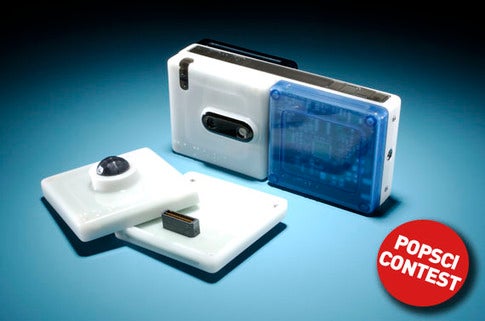 Last December, we launched the PopSci.com/Bug Labs Build-a-BUG Challenge. Users were tasked with building their ultimate BUG based off the BUGbase and BUGmodules—an open, modular consumer-electronics hardware and Web-services platform that you can use like Legos to build practically any gadget you can dream up.

The second-prize contest called for future module ideas. Bug Labs has more than 80 upcoming BUGmodules spec’d and in the pipeline, but that didn’t stop you from sending in a slew of wholly unique and innovative ideas.

So without further ado (and in no particular order), below are our contest winners Congratulations to them and to all who entered, and keep an eye out for future PopSci contests.

Vinzant Everett suggested:
A module that has IR (transmit and receive), XBee, and Bluetooth. This way you could build an intelligent remote control. Combine it with a database of your movies and you could set up sound, playback device (DVD, VHS, HD-DVD, BluRay), and T.V. just by selection of the movie.

From Tristyn Gibbons:
A module I would like to see would be a low powered water firing mechanism. A small “pulse” of water spurted from the device at any desired height, angle and distance.

Usage examples would be:
• A system to repel birds and insects from the garden.
• To train a pet not to go into a certain area i.e. garden whilst you are not at home.
• Office fun
• This could also be used to fire alcohol for drinking games. People would be able to upload their own drinking games to share across the world.

It could also serve as a hydraulic pump so that you could build highly programmable electromechanical systems, the Make & Instructables crew would love it.

Use the video modules to record and map movement and a simple targeting program to fire the pulse of water. If the mechanism could also be used as a pump then applications such as aquaculture would be fantastic. Or, you could have a few pots that you could water and fertilize online remotely such as from work or on the road or on holiday.

I picture this as a small unit on a highly adjustable legs (four for stability) very robust and of course weatherproof. Simply mount where needed and use the imaging and wireless capabilities of the BUGmodules to create a soloution around a problem.

Eric and Lori Smith proposed:
Build a ATSC/HDTV Tuner/Antenna that can work in conjunction with the BUGbase unit and MicroSD slot for DVR functionality and in conjunction with your upcoming 2X video screen for widescreen format over-the-air television viewing while on the go.

You would have to put the capabilities of an item similar to the Hauppauge WinTV-HVR-950 into the new ATSC/HDTV Tuner and PVR BUGmodule.