A floor-to-ceiling virtual instrument that can rock for real 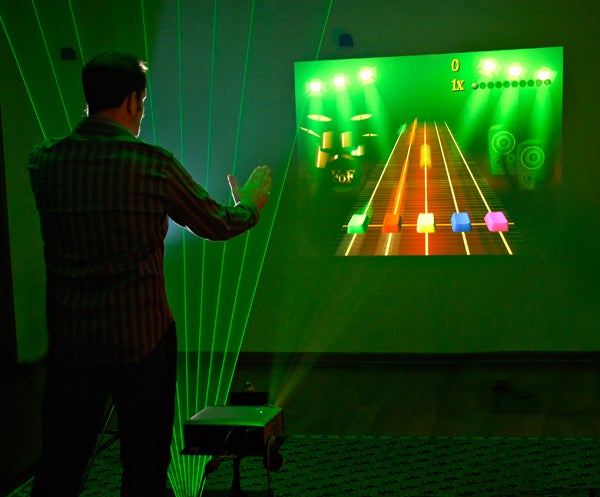 Playing the harp isn’t the most high-tech pastime—unless, like Stephen Hobley, you use lasers in place of the strings. Though not the first home-built laser harp, Hobley’s creation is unquestionably the coolest. Played by disrupting the laser beams with his hands, it can produce just about any sound. Better yet, it’s also a fully functioning controller for a version of Guitar Hero.

The harp consists of a box with a power supply, a 450-milliwatt green laser, a mirror and a motherboard. After determining the beam’s frequency, Hobley was able to tune a sensor so it would detect only the laser and not any ambient light. Touching a beam deflects light toward the sensor, triggering software on a PC that translates hand movements into sounds. He also wrote a script that maps notes from the harp to keyboard controls in the videogame.

Hobley is now selling the plans for the harp on his Web site (stephenhobley.com). He says he’s recently had to upload a video of himself playing the game: “It was a direct response to all the comments I got to ‘play Freebird!'”

Check out the video below, then turn the page to see how it works.

Laser The beam reflects off a fast-moving motorized mirror, fooling the eye into seeing 10 lasers instead of one.

Sound Hobley moves his hands up and down the ends of the beams to affect the sound. A Nintendo Wiimote on the sensor tracks his hand movements, and the data is sent via Bluetooth to the computer to create effects like swooshes and pitch bends.

Gameplay Hobley wrote a script that maps signals from the harp into keystrokes for a PC version of Guitar Hero called Frets on Fire.

The H2Whoa Credo: DIY can be dangerous.
We review all our projects before publishing them, but ultimately your safety is your responsibility. Always wear protective gear, take proper safety precautions, and follow all laws and regulations.