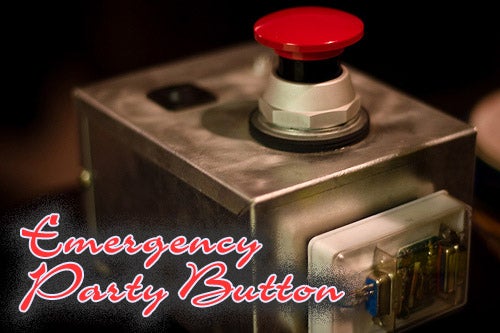 You never know when the level of festiveness in your home might suddenly become critically, even dangerously low. Thankfully, one vigilant soul has put such concerns to rest by creating the Emergency Party Button, a DIY system that with one press transforms a seemingly ordinary apartment into something resembling Rick James’s rumpus room.

The giant red button—activated with a dramatic turn of a key, WarGames-style— kills the lights and closes the curtains, while instantly activating a fog machine, lasers, blacklights and an LED sign—mostly using the industry-standard X-10 home automation protocol. It turns on the stereo too, firing up Haddaway’s “What is Love.” (Was there really any other choice?) The whole system only cost a little over $600 to put together, a small price to pay when you need to party so badly, it’s an emergency.

Read more here about how the project was done.