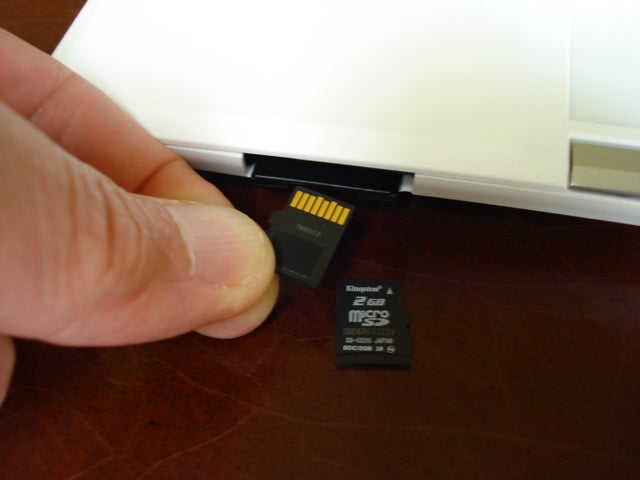 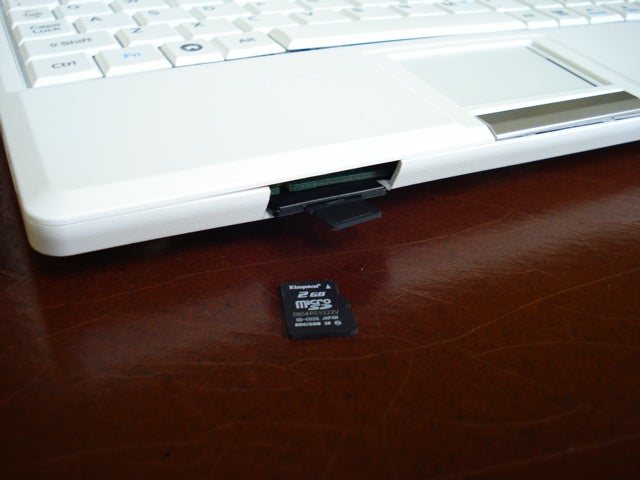 Including a built-in SD card reader in the ASUS Eee PC was just one of many smart decisions that went into the lovable little portable (are you listening Apple?). Without a large hard disk, memory cards are crucial for any Eee user wanting to store large media collections, keep tons of applications, or boot multiple operating systems, allowing for a virtually unlimited data storage system without any external add-ons. While SD and SDHC cards are a convenient storage media, we’re going to add a second SD-based drive specifically for sleek microSD cards—the multi-gigabyte, thumbnail-sized media that are much more befitting of the Eee PC’s diminutive dimensions.

By installing a second reader for microSD cards, you will have two SD-type drives capable of generating triple boot OS options: the internal SSD with the Eee PC native Xandros Linux OS, SD drive with Windows XP, and microSD drive with Pupeee Linux. Just hold down the ESC button during the Eee PC boot and you’ll have the easiest triple boot option ever created.

NOTE: Ideally, the SanDisk MobileMate SD Plus reader would’ve been a better choice for this project. Unfortunately, it was just a wEee bit too big for practical installation. And while Asus has been somewhat non-committal on the warranty status of hacked Eee PCs, cutting into the case for this mod will almost certainly void your warranty, so proceed at your own risk.

Remove the battery from the Eee and completely disassemble it down to its tighty-whiteys. If you need more help in opening the Eee PC, see this tutorial.

Open the MicroMate SD reader. The reader’s case is a snap fit, so gently pull the two halves apart. A little help from a flat-bladed screwdriver should coax the case apart. Extract the reader’s PCB. This PCB is very delicate. Handle it with care.

Break out the saw blade for some major Eee PC surgery. First cut the screw post off flush with the bottom of the lower case that is adjacent to the keyboard ribbon cable connector. The MicroMate SD reader will mount directly over this post. 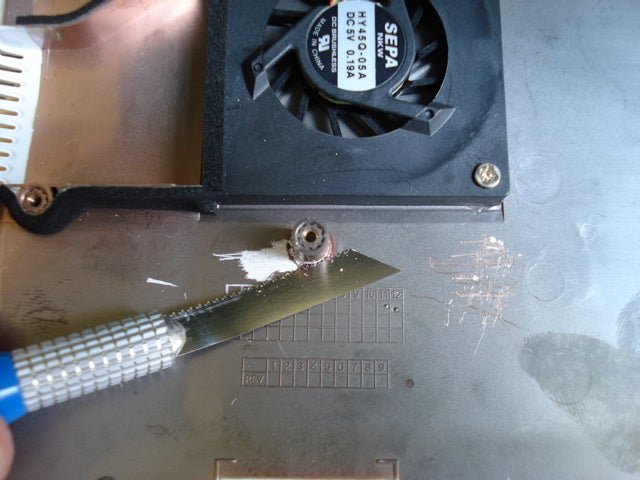 Carefully remove this screw post to make room for the microSD reader.

Lay the MicroMate SD reader’s PCB in position on the Eee PC’s lower case. Remember the reader will be mounted upside down. Mark the width of the SD card slot on the exterior front edge of the lower case. This measured and marked area must be cut away for allowing external access to the reader during normal operation of the Eee PC. Once the rough opening has been cut, smooth the entire surface with a fine grit sandpaper. Remove all plastic dust when you are finished..

Remove both of the plugs from the USB cable. Expose, strip, and tin the four USB wires on both ends: red, white, green, and black. Solder one set of these wires to the PCB pins of one of the available USB ports. I used USB port 4 for this project. The wires should be connected in this order:

Now solder the remaining set of wires on the USB cable to the USB plug of the MicroMate SD reader PCB. Watch the connection order on this plug, it is the reversed order from the USB port wiring scheme. 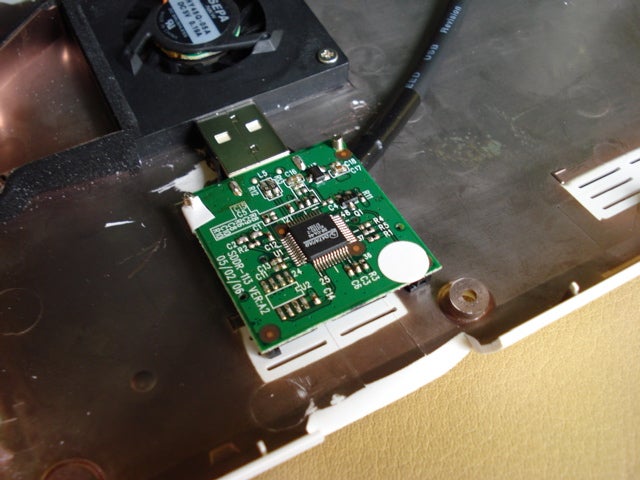 Completely insulate this reader and its USB connector prior to reassembling your Eee PC.

While the Eee PC is still a pile of parts, carefully insert the keyboard ribbon cable into its PCB connector, plug in the battery, and press the power ON button. The Eee PC should spring to life and the LED should flash on the MicroMate SD reader PCB. Once the PC has booted, insert an SD card into the reader’s card slot. The green LED on the reader should light and the Xandros OS should recognize the card and launch a removable media window. If all of these tests pass, negotiate through the Linux OS and shutdown the Eee PC (i.e., system shutdown under the Settings tab). Remove the keyboard and battery from the Eee PC.

If these tests failed, check your wiring. Also, these reader’s are very delicate and easily damaged. If the green LED fails to light and your wiring is correct, you might need a new reader.

Thoroughly insulate the entire reader PCB and its USB connector. Butt the reader’s USB connector against the Eee PC fan housing. Mount the reader PCB upside-down on the Eee PC lower case with two screws. This mounting technique will ensure that the reader is a stable platform. Slide the microSD-to-SD adapter into the reader’s card slot. Route the USB cable through the underside of the Eee PC PCB. Reassemble the Eee PC, plug in the battery, insert a bootable microSD card into the newly installed MicroMate SD reader, and press the power ON button. During the boot process, press the ESC key and launch a Boot device selection menu. Select the microSD card as the boot device and try out the new Pupeee OS.

This microSD drive is not limited to the Pupeee Linux OS. Other OSes will work, as well. Try a DOS boot for some of your old DOS games or a BartPE boot for a taste of Windows XP. Now the next challenge: how to label all those tiny microSD cards?

If you missed our first installment of Eee PC school, see it here for instructions on adding an inexpensive keyboard backlight.