A remote-control, baseball-hitting robot made from a mishmash of junked parts steps up to the plate. See inside for video 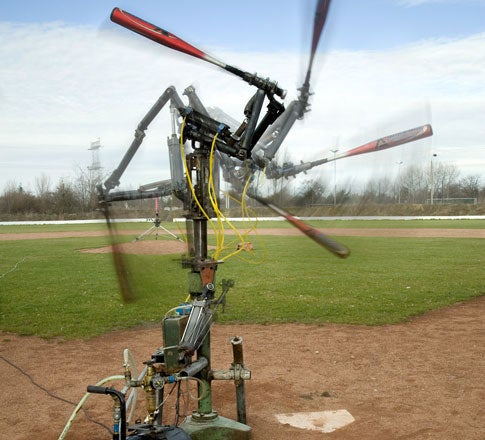 True, it was built in Germany-and by an Englishman. Yet the Headless Batsman could not be a more American invention: a 265-pound quasi-human-shaped robot made from a jumble of salvaged auto parts, steel piping and pneumatic hoses for the sole purpose of belting every fastball thrown its way.

Frank Barnes, a 30-year-old industrial artist, built the Batsman, as well as a complementary pitching machine, on a whim. He spent a day taking cuts with a bat to work out the swing mechanics, ultimately electing to focus on the robot´s hips, shoulders and arms. A junked disc brake acts as its hips, enabling the torso to rotate as the bat swings through, and Barnes machined the arms from steel pipes. To give it a solid stance, in lieu of legs, he used a stand originally intended to hold cable spools.

Barnes holds batting practice all by himself. Standing behind the robot, he uses a homemade controller to fire a ball out of the pitching machine. Then it´s time to hit. On the same controller, one button rotates the robot´s hips, another activates the arms, and a third lifts or drops its inside shoulder, changing the trajectory of its swing. After much practice, Barnes can now get it to hit most pitches.

The Batsman won´t make the majors, but Barnes suggests another career option: â€Put some wheels on it, drive it around-I figure I can use it for security.â€

baseball
robotics
Science and Technology Videos
Sports
you built what?!