How Geeks Get Down

When dance fever hit MIT, students built a computer-controlled, LED-lit disco floor. Now you can, too 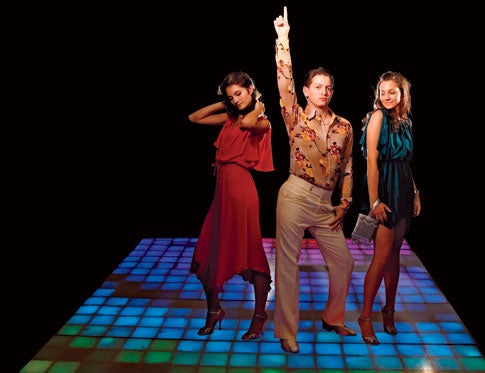 Everyone who actually worked on the floor and isn’t a professional model, raise your hand.

A few semesters ago, a group of undergrads at the Massachusetts Institute of Technology took on a challenge more daunting than classwork: disco. Before a dorm party, they worked night and day for a week to build a computer-controlled, pixelated dance floor out of 1x4s, LEDs, tinfoil, paper towels and old computer parts. The
8-by-16-foot result would make Travolta weep with joy.

Each of the 512 six-inch-square pixels contains three LEDs pointed down at a square of paper towel that sits in a larger piece of foil. The foil reflects the light up through the plastic floor, while the paper towel mutes its glow. (LEDs stay cool, so the towels won´t ignite.) A computer controls each pixel individually, and the software generates 25 disco-tastic patterns, enabling DJs to match the light show to the music they´re playing.

After earning minor fame at MIT (one of the inventors scored dates because of his uncanny soldering skills), the students began upgrading the floor. Their latest model, for sale at dropoutdesign.com for $450, has a prebuilt circuit board and instructions, so anyone can turn a basement into a discotheque.

Just how many hand-soldered joints were needed to construct this modern ode to the days of polyester and the Bee Gees? Find out in Episode 26 of the PopSci Podcast, in which Jonathan gets down with Mike Anderson, one of the MIT students behind the LED-powered homemade disco floor. Subscribe to the podcast or download the episode directly with the buttons below: