It walks, it blinks, it seats six, and it blasts Kraftwerk: Meet one manâ€™s 17-foot-tall pet project 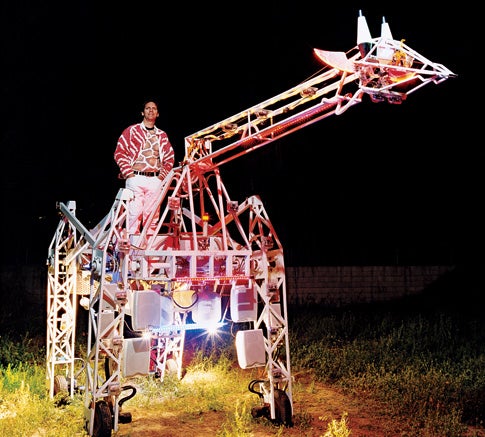 It started with a seven-inch walking toy giraffe and a desire to see Burning Man from a higher vantage point. A year later, Lindsay Lawlor rode into the desert art
festival atop Rave Raffe, a 1,700-pound robotic giraffe sporting 40 strobes, 400 LEDs and bone-shaking speakers.

Lawlor wanted his Burning Man ride to be a true walking vehicle, so with the help of his landlord, Gary Stadler, he copied that toy´s locomotion system on a massive scale. The front and back legs opposite each other step ahead at the same time, propelled by an electric motor. When those legs land, hydraulic brakes lock the wheeled feet, and the other two legs take a step. Canting from side to side, Raffe lumbers ahead at about a mile an hour. A propane engine runs only to recharge the batteries, so the beast is quiet and efficient. When Lawlor let Raffe shuffle off alone in the desert, it walked for eight hours.