Think making a robot sounds hard? Not anymore. Now you can turn your Roomba into one 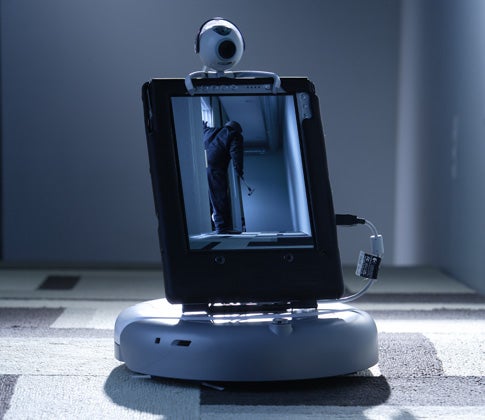 Why: To patrol your home while you’re away, capturing images you can access on any Web-connected device.

How: Use the onboard PC to send the Roomba instructions to (roughly) follow a predetermined path around your pad. Set the webcam to snap a picture every few minutes and automatically upload it over your Wi-Fi network to a photo-sharing site such as Flickr, which you can log onto from anywhere. Advanced trick: Wire the battery pack to recharge when the Roomba hits the base station so that it can operate indefinitely.

The Roomba Vacuuming Robot may not stand up to a Dyson for sucking power, but for $280, it is an incredibly sophisticated robot. Its locomotion system scoots it along at one foot per second, while its sensors detect and navigate obstacles. To build something that complex yourself requires serious robotics chops. So I was thrilled when the folks at iRobot told me recently that they´ve made the Roomba a hackable robotics platform.

Any Roomba rolling off the assembly line after October 24, 2005, has a serial command interface (SCI)-new software that allows it to be controlled by preprogrammed instructions, making it an ideal ready-made base for any robotics project.

The Roomba can´t store instructions itself, so you´ll need to connect something to its serial port to feed it directions: a computer, a microcontroller board, or one of the new third-party control devices, such as the RoboTooth, which lets you steer
the Roomba with a Bluetooth cellphone.

Build Your Own Roomba Robot

How to Build a ´Bot, Simplified