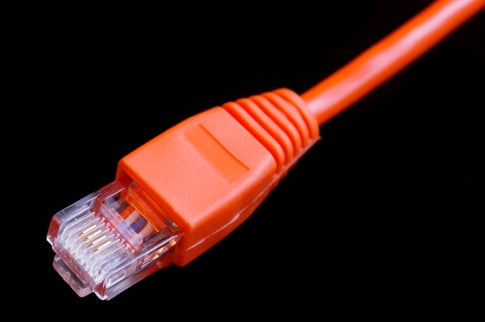 How many cables go into the back of a wired netcam, which hooks directly into your ethernet? Also one, if you´re using PoE (power over ethernet). PoE takes advantage of the fact that only two of the four twisted pairs of wire (connected to pins 1/2 and 3/6) in a standard Cat5 ethernet cable carry signals. The other four wires are available to deliver power to your camera or whatever other AC-powered device you have on the network.

At the high end of the professional scale, you can just spend a few hundred dollars extra and buy a netcam with PoE connections built in, plus a similarly equipped ethernet router, hub or switch.

If your budget is a little more constrained, consider a POE adapter set, such as D-Link´s DWL-P200 for about $45 (plus any adapter that might be needed between its plug and yours). And of course, if your widget-acquisition tool of choice is a soldering iron rather than a credit card, you can just build your own.

For quick-and-dirty PoE, just slice open your ethernet cable once near the end that will plug into your network hub and once near the netcam end. Depending on how many holes you´re drilling in which walls to run the cable, you may want to do your surgery after the cable is in place. Find pairs 4/5 and 7/8 (blue/blue-stripe and brown/brown-stripe respectively), cut them, and strip a little insulation. (This page is an invaluable reminder of which pairs go with which colors in a standard cable.) Cut up your power cable, and solder the two wires on the power brick end to the pairs-both wires in each pair, because you need all the current-carrying capacity you can get-at the hub end and the two wires on the plug side to the matching pairs at the netcam end. Make sure you get the match right, or you´ll be delivering power to the connection on the camera that expects a ground and vice versa. (For more information, including pictures, see cablemodeminfo.com.)

For a more elegant version, get a couple double-outlet RJ-45 wall jacks. One will go near your hub, the other near the camera. Wire the pins for the signal pairs (1/2 and 3/6) together; you´ll be running a long Cat5 cable between the jacks and a couple short cables from the jack at each end and the hub or the cam. Then attach the power supply to the pins for pairs 4/5 and 7/8 in the outlet of the hub-side jack where you will plug in the long cable. Same for the power plug at the netcam end. (As you can see at , you can get away with single-outlet jacks if you´re willing to do a bit more fiddling and crimp together your own cable connectors.)

Sound too easy to be true? It is. Ethernet cables weren´t designed to carry power, and depending on how many watts your netcam draws, what goes in as 5 or 12 volts at one end of the cable might turn into an inadequate 3 or 10.5 at the other end. The PoE calculator at gweep.net will give you a good idea of what kind of voltage drop to expect and whether you should care. You can fix this problem by using a slightly higher voltage at the input end, or if you´re really ambitious you can inject a much higher voltage-more volts means less amperage, thus less resistive loss for the same number of watts-and then convert back down to the level you need (the pros typically use 24 or 48 volts DC).