TV Wherever You Wander 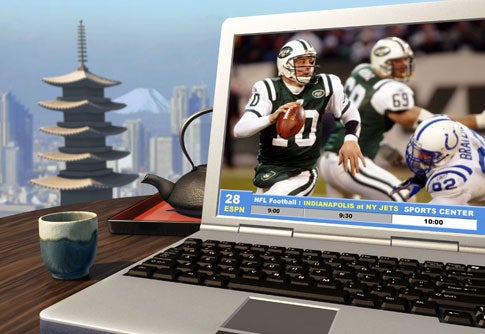 You’re sitting in your Tokyo hotel room on a business trip and the only English channel on TV is CNN. But you don’t care, because you’ve got a direct line back to your living room. You open your laptop, and suddenly you’re flipping through your TV channels and seeing live American TV just as though you were on your couch. You can even access your TiVo and all its recordings. When you get back home, you can tune in ESPN on the laptop while you’re grilling in the backyard.
Where digital video recorders brought us time-shifting-watching what you want when you want-a pair of new services introduce place-shifting: watching what you want where you want.

The idea of streaming media from your PC out into the world isn’t exactly novel, but it’s finally becoming useful for the masses. Orb Networks launched as a $10-a-month online streaming media service last November, then dropped the fee in March. And now the long-delayed Slingbox has arrived, a $250 gold-ingot-shaped device that sits between your cable box or DVR and your home network and feeds video over the Internet, with no additional monthly fees.

Orb and Slingbox have several similarities but also substantial differences. I brought my laptop to Starbucks, ordered a Venti, and put them to the test. See the facing page for my results.

From your pc to any device

Who it’s for
Anyone with a PC-it’s free!-but those with Media Center PCs or TV tuner cards will get the most from it.

What it does
Install the free Orb software on your home computer (PC only, although Mac and Linux versions are coming) and access all of that computer’s media over the Internet. This includes live TV (if your PC has a compatible tuner card), video files, audio files and digital photos. You can also check out a webcam feed from home, schedule recordings on your home
PC (a free program guide is included), and listen to Audible audio books. Because Orb is a Web-based application, you
can view your stream on any computer (Mac included), Web-enabled phone or non-Palm PDA. Dell’s Axim 50v Pocket PC provided an excellent picture during my Starbucks experiment.

Setup
Easy. The installer accurately located the media files on my home computer, asked just one simple question about my TV tuner source, and voil-I was streaming. On the road, you can access the media through any Web browser.

How it works
Audio and video quality will depend on how fast your Internet connection is, but overall I was impressed. Even on slow connections, audio plays smoothly and photos load quickly. Video was consistently smooth over broadband, especially when watching in a small on-screen window, as opposed to full-screen. The online program guide is helpful, but you have to load a new Web page for each channel and then click “Play.”

From your TV to your PC

Who it´s for
At $250, mostly just frequent travelers, although watching TV on a laptop anywhere at home is nice.

What it does**
The Slingbox is a more straightforward proposition than Orb because it only streams video, and it does so through a stand-alone device. Connect it to your cable box, DVD player or DVR, and it transmits the feed over the Internet to any connected PC that has the SlingPlayer software installed (Mac, PocketPC and smartphone versions are in the works).

Setup
Also easy. Plug in your video cables and connect the Slingbox to your home network. Then configure it with the setup wizard using a PC on the same network.

How it works
Connecting through the dedicated Sling-Player instead of hitching a ride on Windows Media Player or other standard-issue apps (the way Orb does) offers better on-screen controls and less fiddling with software. The trade-off: You can´t just sit down at any Web-enabled device and log on. And although the Slingbox works with just about any cable box or DVR, its on-screen remote might not always match the real thing, so you could be missing a function or two. I had complete control of my home TiVo box, including the ability to pause and rewind, and even schedule recordings. Video quality was comparable to Orb, except at home, where the Sling software automatically routes the signal directly over your home network (instead of over the Web), for a faster, more reliable stream.

How to get the best streaming video

Both systems allow you to adjust settings based on your network-connection speeds, but the automatic settings worked fine for me.

Use the best video cables

Video was noticeably better on both Orb and the Slingbox when I used S-video cables instead of standard composite-video cables.

The most important variable for getting great video is the connection from your host PC (Orb) or Slingbox to your home network. Wired is best; 802.11g is OK; don´t even bother with 802.11b.

Both systems had no problem getting around my home network´s firewalls.

Resolution will never be perfect

Remember that a standard TV signal is painfully low-res compared with what your computer screen is capable of displaying (and neither system supports HDTV yet), so blown up to full-screen, it will always look a little pixelated. I experimented with lowering the screen resolution on my laptop to better match the signal, but it didn´t help much.