In a chemical reaction straight out of Harry Potter, you can turn dirt into the building block of every computer 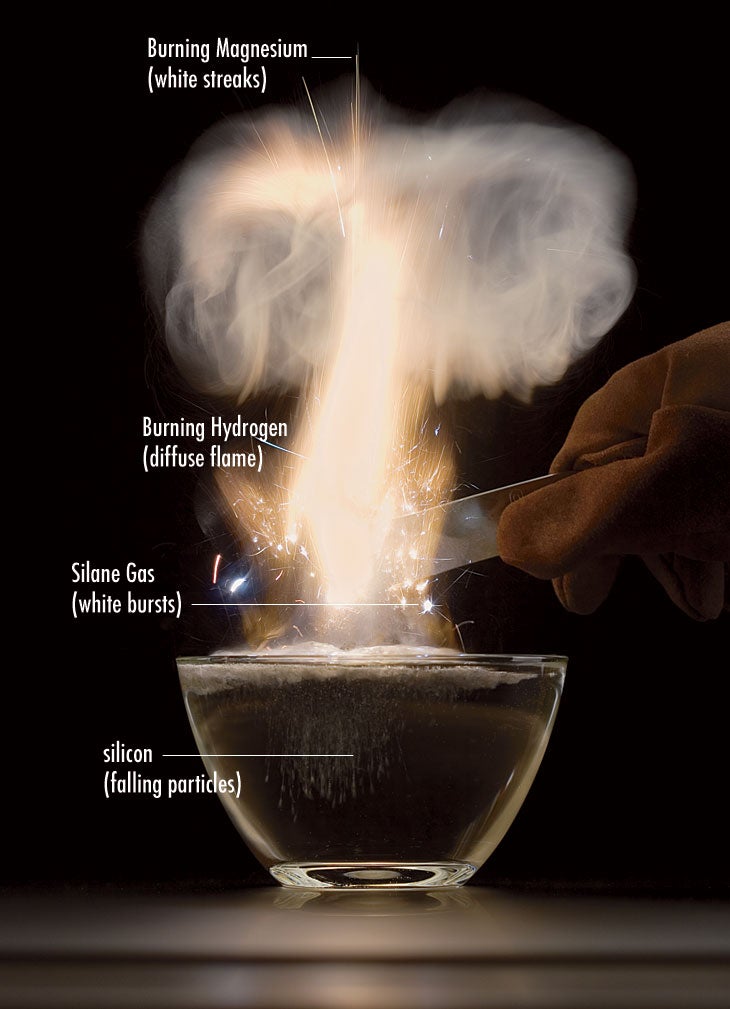 A Reactive Moment
Magnesium, hydrogen and silane burn off while the purified silicon falls

The industrial economy may someday run out of one of its essential natural resources, oil, but at least the high-tech economy is safe in its supply of silicon, the element that is the key ingredient in every computer processor. Its oxide form, known as silica or quartz, is dirt-common. In fact, it is dirt: Almost all kinds of sand, clay and rock contain silica in one form or another, and overall more than half the Earth’s crust is made of silica.

Industrially, silica is converted to pure silicon by heating it with coke (the form of coal, not the drink) in a furnace. But there’s an even easier, if less cost-effective, method that I learned from Jason Stainer, a science teacher in England. All you have to do is heat a mixture of common silica sand and magnesium powder in a test tube. The magnesium steals the oxygen atoms from the silica, leaving elemental silicon.

No reaction is perfect, and in this case you’re left with a mixture of magnesium, magnesium oxide, magnesium silicide and silicon in the bottom of the test tube. Fortunately, the best way to purify it is also the most entertaining. I told my eight-year-old Harry Potter fan that I had prepared a fire potion.

First pour one cup of what is sold in any hardware store as muriatic acid (37% HCl) into five cups of water. (Not the other way around. The old chemist’s saying “Do as you oughta, add acid to watta” is there to protect you from steam explosions that can occur if water is poured into acid instead of acid into water.) Then dump in the contents of the test tube, and you’ll get a wonderful frothing mass of flaming bubbles and a lovely mushroom cloud of smoke. This is one of the best can’t-fail fire potions. (I can also do levitation potions [Gray Matter, February 2004], although I’ve had to explain to my daughter that since we live in a Muggle zone, I’m allowed to levitate only very small objects.)

If there is still some magnesium powder floating in the air, it catches fire too, creating a bright flash and a puff of white smoke. You get three forms of fire in one, and the powder falling to the bottom of the bowl is purified elemental silicon. Spells are fantasy, but potions are real, and this is a great one.

Click to see a reactive moment. Magnesium, hydrogen and silane burn off while the purified silicon falls to the bottom.

Theodore Gray is trained in lab-safety procedures. If you try this at home, you do so at your own risk. Find more info on Gray’s scientific pursuits at periodictabletable.com._