With machinima, anyone can be an amateur animation auteur. Just play (and record) videogames 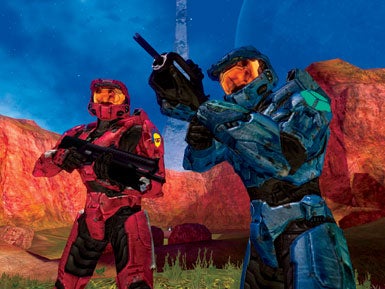 To every moviegoer who leaves the theater saying, “The camera angle in the final scene was all wrong,” it´s time to put your PC where your mouth is. You don´t need Disney dough to make an animated flick these days, not with machinima, an emerging cinematic medium that uses videogames to shoot short films in the computer-animated style of Toy Story and Shrek. The key word is “shoot.” Unlike traditional animation–done frame by painstaking frame–machinima is recorded in real time with the game´s players serving as actors and cameras (you see the game world from your character´s point of view). Use software to capture the scene, then edit the shots and dub in dialogue later.

Machinima first appeared in 1997, when someone added witty subtitles to his Quake speed runs (recorded demos where gamers show how fast they can complete levels of the game). Now the art form is gaining serious indie-film cred: The 2005 Sundance Film Festival included a demonstration
of machinima-making techniques. See the films yourself at machinima.com, and stay tuned for the
fourth annual Machinima Film Festival (machinima.org), coming later this year.

HOW TO >>
Machinima can be made with a variety of games (Half-Life 2, Unreal Tournament, The Sims 2), but machinima.com provides a Machinima Production Kit (MPK) that includes a version of Quake II. The kit is still in alpha stage and a little buggy, but it´s good for a first movie.

1. Open the version of Quake II included with the MPK and start a multiplayer networked session. Have your virtual cast join the game–you´ll need a player for each character in the scene, plus one for the camera.
2. Record the action using Quake´s built-in demo recorder. Shoot as many times as you like from as many angles as you´d like; save a different demo for each shot.
3. Using film-editing software Keygrip II (included in the MPK), delete unnecessary frames and tweak the camerawork.
4. Record your demos to an .avi file with CaptureBatch (included). Add sound and splice scenes using the MPK´s open-source A/V editing software.
5. For the dedicated filmmaker, the MPK includes texture and map editors to customize scenery, props, characters, even facial expressions. Next stop: the Oscars!