PC gamers demand top-end performance from their machine and its accessories. Hereâ€™s the best of the best 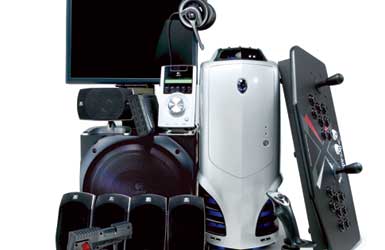 Neo’s recliner in The Matrix is my ideal gaming rig: Sit back, jack in, and “whoah!”–total mind-game integration. But until the machines take over, the absolute best a gamer can dois the $5,858 Alienware Area-51 ALX SLI
(XLINK “http://www.alienware.com/” “alienware.com”), which sports an ultrafast Intel Xeon 3.4-gigahertz processor, one gigabyte of RAM, a 148-gigabyte 10,000rpm hard drive, silent liquid cooling and a 7.1-
channel soundcard. The neon-glowing rig even employs a technology called Scalable Link
Interface, or SLI, in which two 256-megabyte NVIDIA GeForce videocards share the graphics duties, giving you the most detailed scenes possible (short of plugging directly into your skull).

Although today’s games are designed to take advantage of such monstrous power, you don’t need to spend six grand on a PC to play. Any computer with a 256-megabyte graphics card, one gigabyte of RAM and a two-gigahertz CPU will keep you in the deathmatch. The key to kicking butt is often in the accessories–super-responsive controls, rich surround sound and a fast monitor are all essentials for victory.

The 19-inch NEC Multisync GX LCD [A] ($550; nec.com) has an eight-millisecond response time, which virtually eliminates “ghosting”–the distracting trails often left behind fast-moving objects on the screen. Clip on an Eclipse Computer Light [B] ($30; onetech.net)–its concave reflector and 10,000-hour bulb cast a soft, even glow to minimize eyestrain during all-night World of Warcraft sessions.

The D-Link DGL-4300 108G Wireless Gaming Router [E] ($170; dlink.com) prioritizes your network traffic for online gaming, so you can keep your firewall and virus scanner running without worrying about “death by lag.”

The X-Arcade Joystick [F] ($150;
x-arcade.com) replicates the old coin-op controllers of your youth. For a more modern stick, the Logitech
Freedom Cordless Joystick [G] ($70; logitech.com) uses a high-frequency 2.4-gigahertz signal for fast wireless communication and customizable buttons and triggers for, say, the warplane fighters in Battlefield 1942.

The Logitech MX1000 mouse [I] ($80;
logitech.com) uses a laser that is 20 times more sensitive than a traditional optical beam. Use it on a smooth, solid surface, such as the Flexiglow xRaider Mouse Pad [J] ($20; flexiglow.com) for the most precise aiming in Doom 3.
Or just use the Monster Gecko Pistol Mouse [K] ($40; monstergecko.com)–a gun-shaped optical mouse with an 800-dpi scan rate and a trigger that acts as a fire button.