Mac of All Trades

Want a Mac in your living room? How about your car? Appleâ€™s tiny and affordable Mini does it all 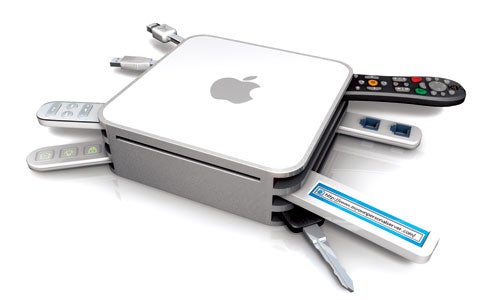 Mac of All Trades

The most amazing thing about Apple´s new Mac Mini isn´t its diminutive size, although you can´t help but be surprised at how small it is when you see it in person (about the size of a stack of five CDs). Nor is it the price, although it is the first Mac to break the $500 barrier (provided you supply your own display, keyboard and mouse). The most amazing thing is how an entry-level computer aimed at grandparents and switchers (PC users migrating to the Mac) has ignited the geek community into thinking outside the 6.5-square-inch box. Within hours of the Mini´s announcement-weeks before it started shipping-the Web was abuzz with riffs on all the things one could do with such a small and cheap Mac, and Mini-dedicated Web sites such as 123macmini.com and modmini.com began popping up soon thereafter.

One of the most popular ideas to emerge was using it as a living-room computer for recording TV and storing and playing back movies, music and photos. It even inspired an ad hoc group of programmers to begin working feverishly on a Mac equivalent to the Media Center Edition of Windows XP. Called CenterStage, the customizable, open-source app will provide a 10-foot interface to navigate your media with a remote control. (Follow the group´s progress at centerstageproject.com.) Meanwhile, car tuners noticed that the Mini fit nicely in a glove box, kicking off a flurry of sleek â€car-puterâ€ installations. Sound like fun? On the next page you´ll find details on what you need for these two projects and a couple others, as well as instructions for cracking open the Mini for home upgrades.

The Living-Room Mac
Why: To have a stable and virus-immune machine for storing, recording and playing TV, DVDs, MP3s and digital photos.
Parts and labor: For simple playback, you can plug the Mini into your TV using a DVI cable and into your stereo using a 1/8-inch-jack-to-RCA cable. To add DVR functionality, you´ll need
an external TV tuner such as the EyeTV ($330; elgato.com) or EvolutionTV ($280; miglia.com). (You can also send video to your Mac from your Series 1 TiVo-find details at http://www.fajkowski.com/tivo/.) Until CenterStage goes public, your only option for a 10-foot interface is to add another box called the EyeHome ($200; elgato.com), which comes with its own remote control. If you don´t care about the interface, pick up a Digital Media Remote ($30; keyspan.com) or set up Virtual Network Computer, and control your Mini from any Palm, PocketPC or Java-enabled cellphone. Directions are at en.wikipedia.org/wiki/VNC.

The In-Car Mini
Why: To have full computing power on the go. Stash the Mini in the glove box and attach it to a touchscreen LCD in the dash to play DVDs and MP3s, edit Word docs, or surf the Web outside your local Wi-Fi hotspot.
Parts and labor: In-dash touchscreen LCDs run $275 and up; the two most popular makers are Xenarc (xenarc.com) and
Lilliput (lilliputweb.net). You can power the Mini straight from your cigarette lighter, but a better option is the Carnetix P1900 dual-output 140-watt regulator ($100; carnetix.com)–it can supply juice to both the Mini and your monitor straight from the car´s battery. Finally, control it all with software called i3 ($25; i3team.com), a customizable interface designed specifically for easy navigation on small touchscreens. Be inspired by other people´s installations and learn more at macvroom.com.

Two More Cool Mini Projects Web Host:
Instead of paying a monthly fee to a hosting service, host your Web site on your Mini using pre-loaded tools such as FreeBSD and Apache Web Server. Excellent tutorial at mundy.org/blog. Phone Switchbox: With an open-source tool called Asterisk, your Mini can be a call center for both VoIP and traditional phone lines with dozens of features, including an automated attendant, voice-response menus and your own hold music. Download it at asterisk.org.

UPGRADING THE MINI
Unlike larger Macs, the Mini isn´t designed for easy home upgrades. Fortunately, Apple´s prices for point-of-purchase upgrades are pretty reasonable. For instance, you can double your hard-drive size from 40 gigabytes to 80 for only $50, add internal Bluetooth and Wi-Fi for $100, and swap in a DVD-burning SuperDrive for another $100. Installing these parts yourself requires major surgery for very little cost savings. Beefing up the Mini´s paltry 256 megabytes of RAM, however, is an ideal DIY job. It´s easy, it doesn´t void the warranty, and you can save about $200 buying a one-gigabyte stick from a third-party vendor (check dealram.com).

1. Set the Mini upside- down on a soft
surface. Insert thin putty knives between the metal and the plastic on each side. Pry the knives outward harder than you think you should. After some scary cracking noises, the tabs holding on the case will release and the bottom will pop up.

2. To replace the RAM, pull the tabs on each side away from the RAM stick until it pops up. Carefully place the new one in the slot, and push down hard until the tabs lock in place.