Q: What is podcasting? 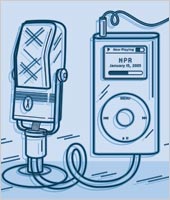 A: Podcasting is a way of having Internet audio programs–from amateur talk shows to professional radio–delivered automatically to your MP3 player so that you can listen to them anytime.

To understand how podcasting works, think first about RSS, on which it’s built: You subscribe to a feed on your favorite site, and its headlines are downloaded to an RSS reader on your desktop. Podcasting functions the same way except that the feed carries an MP3 file (the podcast), which can be automatically sent to your iPod (or any MP3 player) next time you connect it to your computer. A podcast aggregator such as iPodder (ipodder.org) manages your subscriptions.

Podcasting was born out of some work I did on the RSS format to allow it to carry enclosed files, along with former MTV veejay and radio host Adam Curry’s desire to disseminate audio shows in an easy way. He built the first version of iPodder in Applescript and released the code less than six months ago. The technology has caught on quickly. Already, hundreds of podcasts are available, including content from National Public Radio and progressive talk station Air America, as well as homemade shows on technology, music, cooking and pretty much anything else someone feels like talking about. For a list of the latest podcasts, check out audio.weblogs.com.