Getting the Lead In

Unlock the mystery of the pencil by turning out a few of your own. 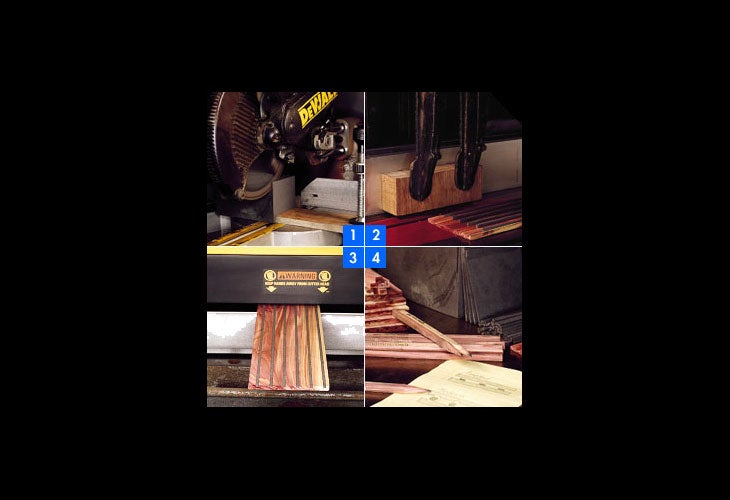 [1] Slice thin sheets of graphite with a miter saw, then cut them into narrow strips to make the “leads.” [2] Use a table saw to cut grooves in a cedar board and glue the graphite in. [3] The planer levels the graphite with the board so you can glue a flat piece of cedar on top. [4] Cut the pencils apart, sharpen them, and start writing.

Some things people make at home, like cupcakes, quilts and cabinets. But pencils? Surely making pencils–how do they get the lead in there, anyway?–ranks right up there with homemade transistors and lightbulbs on the list of difficult yet pointless projects. So of course I had to try it, particularly once I read engineer Henry Petroski’s The Pencil, a 400-page history of the thing.

Long ago, writing instruments were made from many materials, including actual lead (the metal). One recipe called for a for a goose quill, a bullet, a melting ladle and a turnip. You figure it out. (OK, a hint: Start by sticking the quill upright in the turnip.) But when the great graphite mine of Borrowdale, England, was discovered around 1565, graphite pencils (confusingly, still referred to as lead) quickly took over because of the superior smooth, dark line they made. In 1600s Germany, an entire guild of craftsmen did nothing but hand-saw square “leads” from pieces of Borrowdale graphite.

Today, eBay substitutes for the Borrowdale mine: Twenty-pound blocks of high-grade synthetic graphite are readily available. And a power miter saw subs for the handsaws of yore. After I’d sliced off some strips of “lead,” I turned to the aromatic red-cedar closet-lining boards I’d procured from a home center–perfect for quality pencils because of cedar’s smooth whittling characteristics. I used a table saw to cut six slots (mass production, you see), then glued in the slices of graphite, leaving them protruding slightly.

After the glue dried, I ran the boards through a compact thickness planer to make the graphite level with the wood. I then glued a thin layer of cedar on top, used the table saw to separate the six individual pencils, and used a jointer to make them octagonal.

Next I used a hot-stamp lettering machine to apply gold lettering, just like on those sissy store-bought pencils. Once sharpened on a grinding wheel (where real men sharpen pencils), my homebuilt implements wrote surprisingly well: I drew the diagram below with the pencil shown lying on the paper.

Craft-made pencils use square leads with a flat cover. Machine-made pencils use round synthetic leads between two boards with symmetrical half-round grooves: That’s almost impossible to do by hand. But in both cases they don’t “get the lead in there”; they assemble the wood around the lead. Now you know.