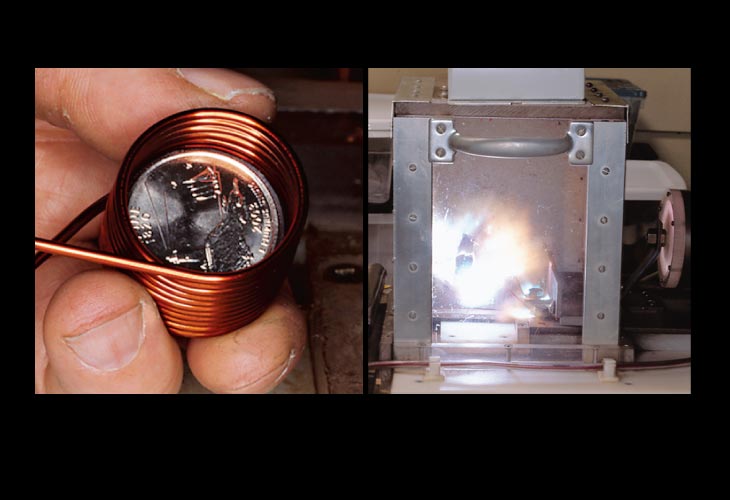 Each coin requires its own copper coil, which is destroyed explosively during the shrinking process.

I remember driving past a fraternity house when I was a teenager and wondering why I could tell instantly that someone was playing the drums live, not on a stereo. Live drums, I realized, have a sharper attack than any electronic reproduction, and the distinction is obvious to the drums in our ears. But shouldn’t it be possible to hit a speaker cone with a magnetic field just as hard as you can hit a drum with a stick?

It turns out it is, but frat boys simply don’t have the technology. Engineers, on the other hand, can potentially go way beyond annoying the neighbors should they choose to get involved in the sport of hitting things really hard with magnetic fields. Take, for example, my friend Bert Hickman, a retired electrical engineer living outside Chicago: He rather enjoys using magnetic force to smash coins to roughly half their normal size. (He then sells them on eBay, of course.)

Bert’s high-voltage equipment takes up most of his screened-in porch (from the looks of things, his wife drew a line at the sliding door–there’s a clear border between tidy suburban house and chaotic suburban lab). Bert begins the coin-shrinking process by wrapping a quarter in copper wire and bolting the leads to copper bus bars, which are connected, by way of a triggered spark gap, to a 600-pound bank of 12,000-volt capacitors. A bulletproof blast shield encloses the coin and coil, and a high-voltage power supply charges up the capacitors. The only thing holding back the several thousand joules of energy stored in the capacitors is the tiny space between the spark gap’s two brass discs.

Pressing a switch triggers the spark gap, which releases the entire charge through the coil in 25 millionths of a second. This creates a huge magnetic field, which induces a current and then a magnetic field inside the coin, which in turn pushes back against the field outside. The repulsion force between these two fields crushes the metal, instantly taking a quarter down to the size of a dime. A large amount of energy discharged in a short amount of time usually entails an explosion, and in this case the copper coil is blown apart with a brilliant flash and a satisfying bang. And, yes, the report is sharper than any drum, proving that you really can hit something as hard with magnetic force as you can with a drumstick.

Bert happily takes custom orders by mail (he charges a shrinking fee, though–visit www.teslamania.com for info). “Clad” U.S. coins, such as quarters, work best–they contain a conductive copper core sandwiched between a nickel-copper alloy–but most metal currencies will do the trick. Just don’t send him your 1937 three-legged buffalo nickel by mistake.

ACHTUNG!
Theodore Gray is a scientist trained in lab safety procedures. If you try this on your own, you do so at your own risk.