Bring A Bubbling Cauldron To Work In A Coffee Cup 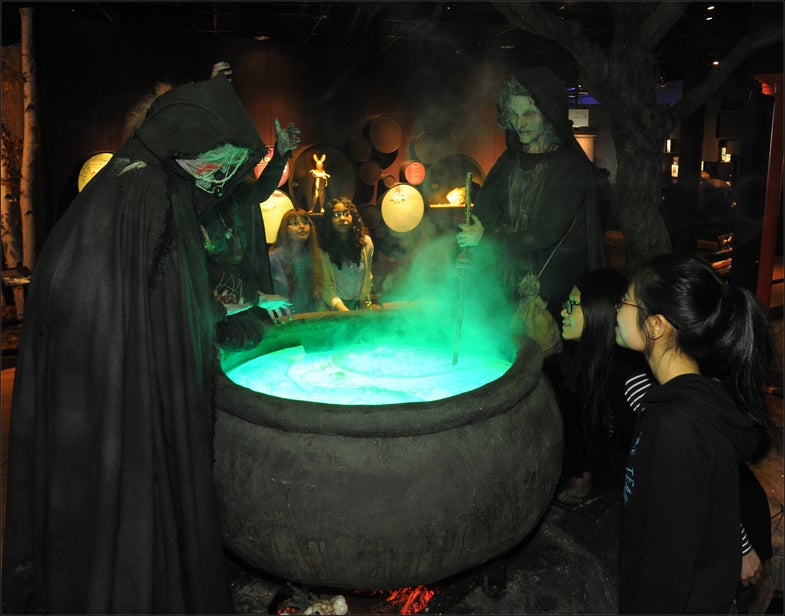 Shakespeare's recipe calls for some grotesque-sounding ingredients like newt eyes, dog tongues, and wolf teeth. But most of these were common nicknames for poisonous plants. "Tooth of wolf" is the highly toxic monkshood, and "tongue of dog" is the carcinogenic houndstongue. Brewed with well-known poisons, such as yew, nightshade, and hemlock, the potion is loaded with aphrodisiacs, neurotoxins, anesthetics, and psychoactives. The witches likely didn't drink it, but inhaling the concoction's vapor could induce a powerful reaction thought to be a magical trance. A life-size model of the witches with their glowing brew is on display at AMNH. ©AMNH/R. Mickens
SHARE

Halloween falls on a Monday this year, so take a few minutes to make it scarier than the mere beginning of another work week. Here’s a DIY hand held fog machine that makes a cup of witch’s brew, like a bubbling, boil cauldron in a coffee mug.

Get one with a female AC adapter cable out, and you can connect it to a male cable battery supply.

Using a plastic cup, set the fogger in the bottom and run the cable out the top. A shallow cup works best, with the water level just above the jet. Keep a bottle handy for topping it off.

Now, set the smaller cup inside your mug, with the excess cable and battery supply between the two cups. Use duct tape to seal the gap between the two at the lip, and just add the bottled water.

Ignore the witches from Macbeth. There’s no need for venom, reptiles or body parts. This is a lot less toil and trouble, and you can even top it off at the water cooler to the concern of your coworkers.