Behold the authenticity of an amusement park built around a movie 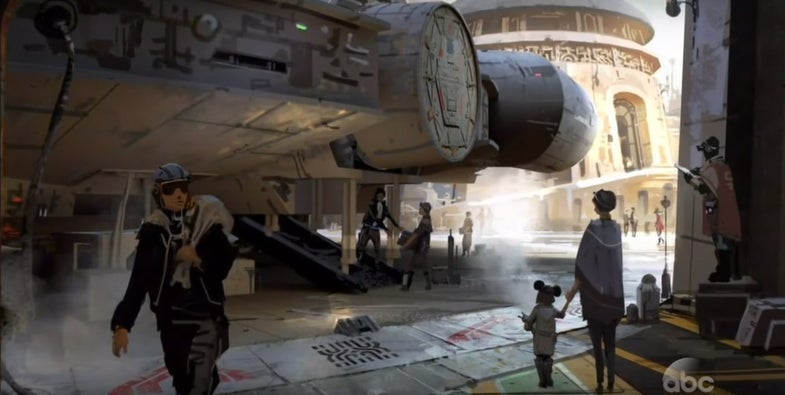 In prose at least as wooden as that in the Star Wars prequels, Harrison Ford (or a Harrison Ford-like robot) announces an imperial consolidation long in the works: Disney’s theme parks are adding a Star Wars section. With concept art unveiled as part of last night’s Disneyland 60 event, we can see interactive battles, familiar space weapons, and of course, “authentic locales”:

These “authentic locales” are the exact opposite: mass-market reproductions of patched together sets for a film. They will evoke a sense of the world, but they are not real. Nothing is real. It is an imitation of an illusion designed to trigger a memory.

We would be more forgiving, and even excited about this theme park, if we didn’t hate this video so badly.

“Imagine actually firing the laser cannons of the Millennium Falcon,” the enthusiastic voiceover declares. “You’re in complete control!” it shouts, to describe a simulation in which the user is, at best, only superficially in control.

The illusion is what we are paying for. The expansions are in development at both Disneyland and Disney World, and each will be 14 acres of carefully calibrated illusion.

“Star Wars is, for a lack of a better word… awesome,” Harrison Ford says with all the enthusiasm of an undercooked ham. There are better words, dictionaries full. Star Wars is a pleasant dystopia, an idle illiterate world inside which we find many delights of childhood.

The experience will sell itself, as movies about plucky orphans facing down evil empires sell themselves. The theme park’s marketing pitch alone does not sell it, and it does not need to. It must merely exist, and exist it does.