Diagnosed millions of years after it died 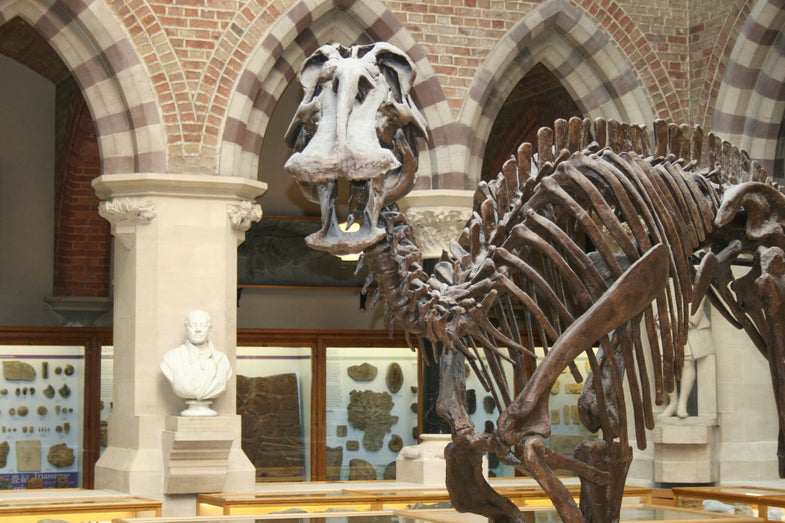 All that remains of the dinosaur is a fragment of an arm buried in a quarry in New Jersey, but it’s enough to know that that dinosaur was a hadrosaur (a duck-billed dinosaur) and that it suffered from terrible arthritis.

In a paper published in Royal Society Open Access researchers describe two fossilized arm bones that were damaged during the dinosaur’s life, thanks to a painful condition called septic arthritis, an infection of the bones that left them pitted and scarred with a cauliflower-like texture. Hadrosaurs have been getting diagnosed with all kinds of diseases lately. Last month a hadrosaur was diagnosed with a benign tumor.

It is the first diagnosis of septic arthritis in any dinosaur.

But the dinosaur wasn’t the only one suffering. The fossil was also afflicted with a condition called called pyrite disease, a condition where the pyrite (fool’s gold) in the fossil oxidizes, leaching sulfuric acid that can eat away at the fossil. Pyrite disease can also creating large crystals that can burst parts of the fossil, destroying delicate evidence. To handle and examine such a fragile specimen, researchers used a micro-CT scan to examine the fossil and create a digital copy of the fossil before it degraded further.

Micro-CT scans are becoming very popular with researchers, who, in addition to using the scans to diagnose dinosaurs, also use the technology to peer inside insects, create digital copies of ants, and get an inside look at fruit fly sex.