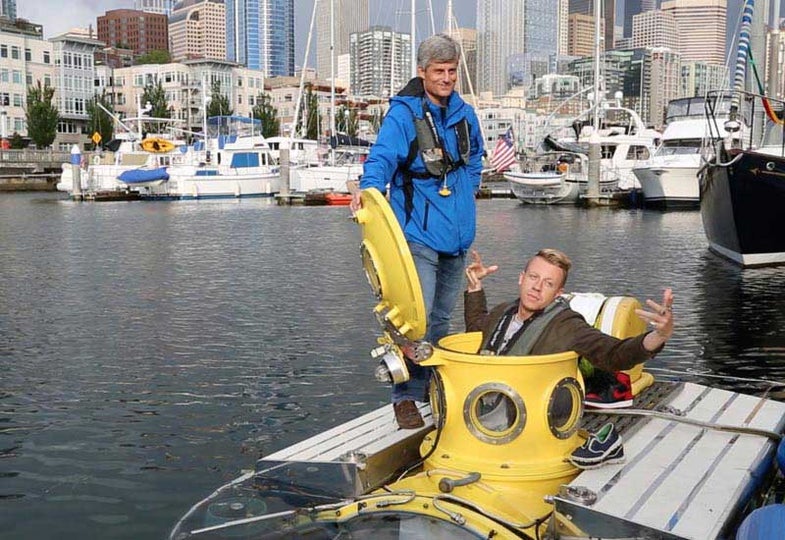 Stockton Rush wants to take explorers into the deep sea. Not just scientific researchers or military personnel, but regular (well, wealthy) travelers on a quest of discovery. But don’t call them tourists.

“We call them mission specialists,” says Rush. Whereas “most people envision tourists as someone who just shows up,­ does something, and then heads home with a bunch of pictures,” Rush’s customers will engage in ocean exploration first-hand—a point that went over well at the Explorers Club in New York City, where Rush was giving a talk.

His company, OceanGate, Inc., has been carrying “mission specialists” and other paying clients to sunken ships and underwater oases since 2009.

There are plenty of submarine excursions for tourists, including OceanGate’s Antipodes and Cyclops 1, but none can dive below 6,500 feet—less than half the average depth of the ocean. But when Cyclops 2 debuts in November, the company says it’ll be the “only privately owned submersible in the world capable of taking 5 crew members to depths of [13,000 feet].”

Today there are only four vessels in the world that can dive so deep, and they’re all government-owned—which means they’re pretty much off-limits for commercial uses. There have been a few private excursions to the Titanic, but those tours relied on the Russia-owned Mir submarines, which have since been put into storage.

Humankind has explored only about five percent of the ocean, and the federal government isn’t doing much to improve that—each year, only about $32 million gets put toward ocean exploration. (By comparison, NASA’s budget is $19 billion.) Rush believes there’s room for a commercial solution.

To kick off a new era of human exploration of the oceans, he’s trying to dispel two myths. The first is that submarines are dangerous.

“In the last 35 years, there hasn’t been a serious injury, and there have been over 15 million people going,” Rush said during the talk. “Statistically, [submersibles are] the safest vehicles on the planet.”

He says the second myth—that deep sea exploration is expensive—is based on the fact that up until now, these vehicles were built by governments and universities, partly as symbols of prestige. The focus was on capability—diving the deepest, or taking the most samples—instead of costs and revenue.

OceanGate is trying to make ocean exploration cheaper, and the main obstacle will sound familiar to anyone following the private spaceflight industry: “How do you launch and recover the vehicle economically?” In order to carry tourists into space, Jeff Bezos’ Blue Origin had to find a way to make spaceflight cheaper, and it does so by reusing rockets to save on launch costs. (SpaceX is also rocking this strategy, but with less of a focus on tourism.)

Launching and retrieving a submarine isn’t quite as complex as rocket science, but a big submersible requires a big ship to ferry it to and from its destination. This usually relies on ships that are specially outfitted with cranes and A-frame structures to lower the sub into the water, and those don’t work well in rough seas. After you’ve already sailed out to the middle of the ocean, canceling a trip due to weather is not only a disappointment to customers, but a waste of money.

To make it cheaper and easier to get in and out of the water, OceanGate designed a sort of trailer—named Ms. Lars (Mobile Subsea Launch and Recovery System)—to tow the submersible behind the ship. While it’s being towed, the sub floats just above the water, a safe distance from the ship; divers hop on an inflatable zodiac raft to enter and leave the sub. Then Ms. Lars floods her flotation tanks with water, sinking 16 to 32 feet below the turbulent surface to launch the sub, then carry it back to the surface after the mission is complete.

“The worst place in the ocean is where you have the air and the water meet,” says Rush. The platform’s design means the sub can deploy even in rough weather, without having to worry about the ship listing as it lowers the heavy vehicle into the water, or the sub crashing into the ship.

And since the platform is tugged behind the ship, Oceangate doesn’t need to charter a special submarine-launching ship—it can deploy using whatever ship is locally available and most suitable for the conditions expected at the site. That helps bring down costs.

Ms. Lars‘ design is based on a platform created by the Hawaii Undersea Research Lab, but OceanGate claims to have made it safer by eliminating the need for scuba divers to assist in the launch and recovery, which can be dangerous, and by making the platform more mobile.

OceanGate is already using Ms. Lars and its current submersibles to take explorers underwater to film Sixgill sharks, explore the waters around Alcatraz, and to make the first sonar scans of the Andrea Doria, an ocean liner that sank off the coast of Massachusetts and is notoriously difficult for divers to reach.

When Cyclops 2 launches, it’ll be able to bring explorers to visit hydrothermal vents and famous shipwrecks, collecting scientific data—such as how quickly ships decay in different environments—along the way. The 22-foot-long submarine will have a 5-inch thick carbon fiber shell, and will be able to dive to 13,000 feet. It can’t reach the very deepest parts of the ocean, but it reaches the average depth, at least.

Cyclops 2‘s debut is scheduled for November of this year, with its first missions to Titanic in 2018. Next year’s Titanic roster is already booked, but the company is taking reservations for 2019.

“[T]oday we are seeing an increased role in private and philanthropic entities supporting advances in ocean exploration and ocean science,” Alan Leonardi, an oceanographer and director of the ocean exploration office at the National Oceanic and Atmospheric Administration, told Popular Science. While he asserts that publicly funded research like NOAA’s will continue to be important, private companies can help “make ocean exploration a more public reality,” he says, as well as advance ocean-going technology, making it more affordable for everybody.

Leonardi also noted that it’s important for OceanGate and others like it to avoid damaging artifacts or underwater habitats. “[M]any organizations that are promoting citizen science and exploration are working closely with NOAA and other agencies to identify and encourage everyone to operate in a way that minimizes the chance of harm to the very objects and habitats that are so worth exploring.”

A trip to the bottom of the sea won’t come easy, or cheap.

Potential deep sea explorers will “need to complete an application online, and then you have to have an interview, and then, we will allow you to pay $105,129,” says Rush. “That is the inflation-adjusted price of the Vanderbilt suite—the first-class suite—on the Titanic in 1912.”

The main thing OceanGate screens for in its application process is physical ability, to make sure customers can get into and out of the boats and helicopter that will carry passengers to the dive site. And experience at sea helps, too. After that, training for “mission specialists” includes learning to read the radar, help with communications, and take photographs. “A lot of the tasks are straightforward but can be engaging,” says Rush. “It doesn’t require any special expertise or training.”

Ocean exploration is probably not for everyone, but Rush thinks that his missions will be much more interesting that just going up and down in a rocket, because there’s more to see and do.