From 283,000 miles out, the spacecraft is already making discoveries 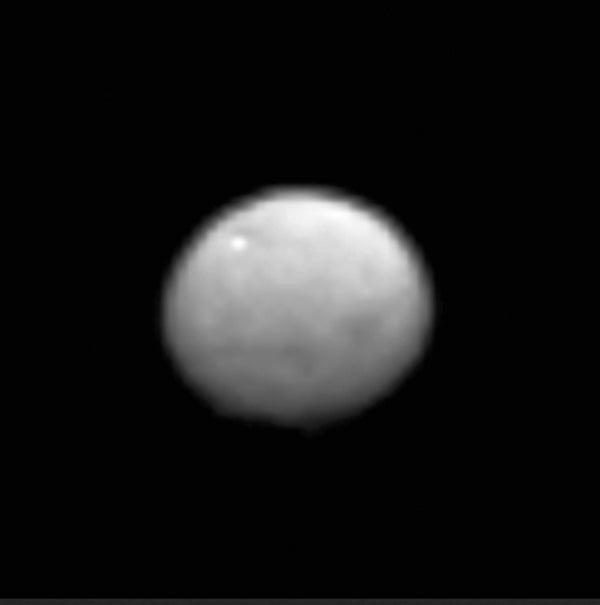 You might think we’ve thoroughly explored the solar system between the Sun and Pluto, but there is still much terrain we have yet to see. The dwarf planet Ceres is the largest object in the asteroid belt between Mars and Jupiter, and we have almost no idea what it looks like.

NASA’s Dawn spacecraft is on its way to Ceres right now, and it just sent back photos that rival our best images of Ceres, which were snapped by Hubble in 2003 and 2004. Though the resolution is about 80 percent of Hubble’s images, the new photos confirm some of the features that Hubble spotted — and reveal a few new ones. 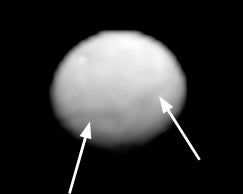 Arrows point to fingers extending from the dark structures on Ceres’ surface.

The dark structure could be a chain of craters or the result of tectonic movements. Or it could be just a dark patch of dirt; we won’t know until Dawn gets closer.

“If it is tectonic, it should provide insight into the interior processes of this small planet,” Mark Sykes, CEO of the Planetary Science Institute and a co-investigator on the mission, said in a press release. “Models of Ceres’ interior suggest there could be subsurface oceans and an outer ice-rich layer.”

Researchers are interested in Ceres, because they think it’s an embryonic planet (or “protoplanet”) whose development was disrupted by Jupiter’s gravity. As a result, Ceres is like a time capsule that may be able to tell us how planets form and what conditions were like in the solar system while the planets were developing. Because of the liquid ocean that may be sloshing around in its interior, Ceres is also of interest to astrobiologists, who think there’s some chance that the planetoid could have supported microbial life at some point.

On January 26, Dawn will turn her cameras on again, and the images she takes will surpass Hubble’s resolution. After arriving in March, Dawn will come within 230 miles of Ceres, mapping the surface of this alien world in unprecedented detail.