POPSCI EXCLUSIVEIs This the Army’s Next Flashlight?

A sneak peak at the flashlight U.S. warfighters havenâ€™t even gotten their hands on yet 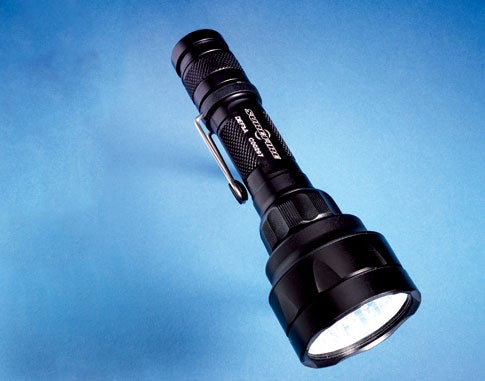 If you need to temporarily blind someone, consider the DEF3. It’s the latest flashlight dreamed up by the U.S. government’s Defense Advanced Research Projects Agency (DARPA)-and designed by optics experts Science Applications International Corporation with flashlight maker SureFire-for use as an Army-issue non-lethal weapon. The device’s five-watt white Luxeon V primary LED can generate 120 lumens of light-more than 10 times the brightness of a standard flashlight and enough to dazzle someone for a few seconds while Marines figure out if he’s holding an AK-47 or a loaf of bread. Unlike most flashlights, which use parabolic mirrors to concentrate light, the DEF3’s beam shines through an aspherical lens that captures and redirects twice as many photons. The DEF3 will be deployed later this month.

Sixteen colored LEDs flank the DEF3’s main beam. They can be used for simple signaling-say, green for “safe,” red for “under fire”-or employed in more-specialized operations.

Infrared For use with night-vision equipment.

The Civilian Version: SureFire’s U2 Ultra

You can’t get a DEF3, but consider the U2 Ultra: It packs a Luxeon III, which produces 80 lumens, and also has a dimmer. Rotate the magnetic switch on the flashlight’s shaft to tell a tiny microprocessor to feed more or less power to the LED-from painfully bright to ghost-story-perfect.