Good news for America's snipers, bad news for other snipers 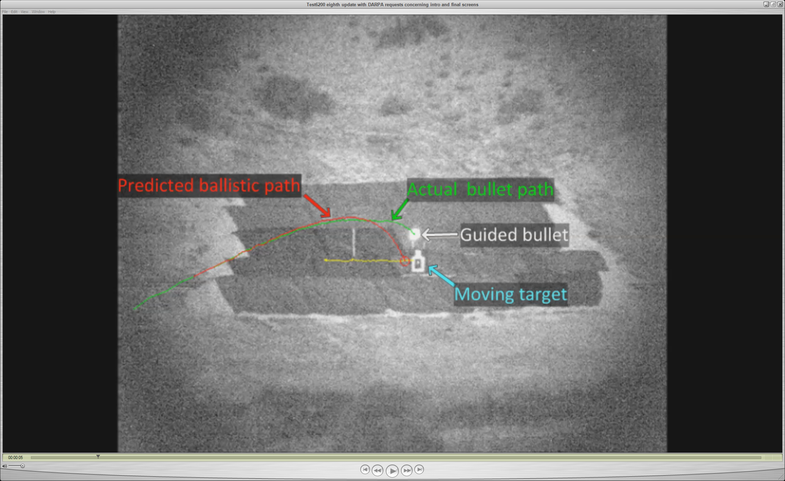 DARPA’s self-steering bullet is, if acronyms are enough to go by, supposed to have razor-fine precision. Extreme Accuracy Tasked Ordnance, or EXACTO, is a bullet that chases its target, adjusting course mid-flight to make sure it hits exactly what or who it is supposed to hit. In February, DARPA tested the bullet against moving targets, and yesterday they released a video from those tests.

The video itself looks like an obscure home console video game from the mid-1980s, where players trace out a path to a robot which then runs away. Tracked on screen are the projected path of the bullet, and then the actual flight path EXACTO takes, bending and turning its trajectory to follow a sideways-sprinting target. Over several shots, EXACTO improves on the aim of both experts and novices, sending .50 caliber doom to its mark each and every time. An earlier video, released last summer, showed the bullet adjusting to hit a fixed target that the shooter missed.

EXACTO is specifically designed for combat in places like rural patrols in Afghanistan, where fighting is at long range and the weather can interfere with snipers’ accuracy. It is, as the name hints, a weapon specifically for edge cases. Most of what snipers do, this won’t change, but in the instances where having a self-correcting bullet could matter, DARPA wants to make sure that the American military has a weapon that can do what its opponents can’t.

Little information about the technology is publicly available, but despite fears to the contrary, its unlikely we’ll see this on American streets anytime soon, if ever. The XM25, another new infantry weapon designed to get around cover, costs around $25,000, which is small potatoes for a military customer but pricey for private buyers, and we can assume that EXACTO systems will come at a steep price, too. Even so, rifles are used in only a fraction of crimes in the United States involving guns. A more accurate sniper round is unlikely to change that.