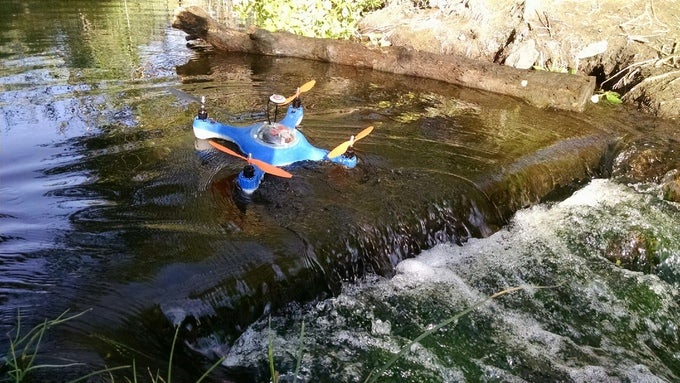 Aguadrone, a crowdfunding project on Kickstarter by Daniel Marion, manages to combine the worlds of fly fishing and remote control aircraft, creating a waterproof quadcopter with some niche potential.

Like the Splashdrone, the waterproof Aguadrone floats and carries a camera for underwater picture-taking. But photography is just the baseline here. What makes the Aguadrone a unique vehicle are the other pods that it can carry. There’s a sonar pod, which sends out a 300-foot Wi-Fi signal when in the water, sending its scans of the water below to a cell phone or tablet without the need for a cell tower. This means the pilot can look to see just how deep a river is, and maybe even find fish under the surface.

Finding fish is one thing, but what if the drone could help the pilot catch them? The Aguadrone has another pod that allows the drone to carry the line, so fly fishers can cast their lines into the water at great distance. This drone then releases the line, so that when it comes time to reel in the prize catch, the drone doesn’t get pulled underwater with it.

The Aguadrone probably isn’t for everybody–the overlap of fly fishers and drone pilots seems like a somewhat niche community. Still, for anyone who is interested in both, for $800 they can get the drone with both the line flier and sonar pods. There are 30 days left in the crowdfunding campaign, and so far the project has raised about $5,000 of its $150,000 goal.