With cells from a patient's own skin 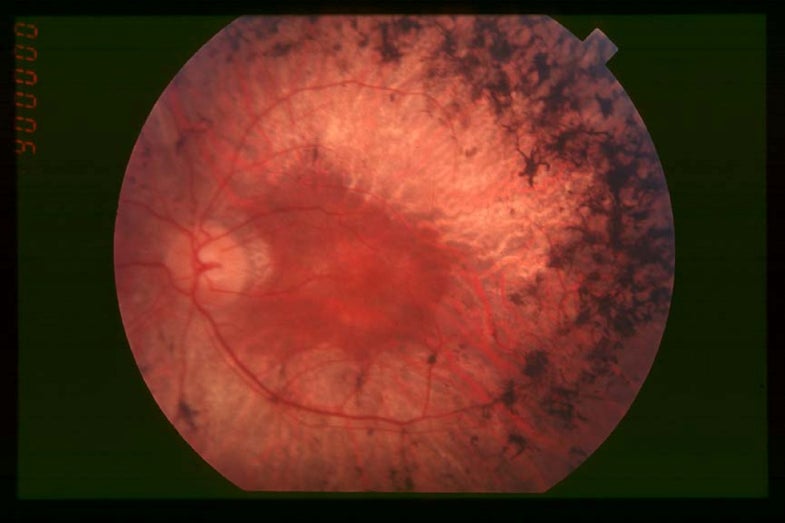 As children, most of the 1.5 million people worldwide who have retinitis pigmentosa start to lose the ability to see at night. As they get older, cells in their retina further degenerate, giving them tunnel vision; by the time they reach adulthood, many are legally blind.

Retinitis pigmentosa is caused by an inherited genetic mutation that causes the retina to degrade over time. Now researchers might have found a way to repair those damaged cells using the gene-editing enzyme CRISPR, according to a study published yesterday in the journal Scientific Reports.

90 percent of retinitis pigmentosa cases are caused by a single mutation on a gene called RGPR. The researchers hypothesized that, if they could insert functional cells without the mutation into patients’ retinas, they could slow—or even eliminate—the retina’s decaying function. But for that to work, they would need functional retina cells that wouldn’t be attacked by the immune system if they were implanted.

To create these cells, the researchers took small samples of skin cells from patients with retinitis pigmentosa. They used a well-established technique that turns specific types of skin cells into pluripotent stem cells, which can later be programmed to become any kind of cell in the body. But those cells still had the RGPR mutation. So the researchers used CRISPR to edit out and replace the gene causing the disease. After 10 days, the researchers tested the stem cells and found that the genetic correction had worked.

Presumably, scientists could then develop the patient’s own cells into functional retinal cells without the mutation for retinitis pigmentosa. If placed in the patient’s eye, the cells could restore some of the retina’s function or slow its degradation, without an immune reaction. Though it’s not yet clear that this would work since it hasn’t been tested, similar experiments on monkeys with the condition were successful. If they do work, this treatments would be a huge step up from treatments currently available for retinitis pigmentosa, which only work to slow the progress of the disease but can’t restore function. Other treatments for retinitis pigmentosa using genetically modified cells are being tested, but the scientists behind this study believe their CRISPR-edited cells will restore patients’ vision more effectively.

Though scientists are still divided about using CRISPR to modify human embryos, there’s more consensus that tweaking other cells for medical purposes is just fine. In fact, the study authors believe the eye is a great place for the first clinical use of CRISPR because doctors and surgeons already know so much about how to operate on and introduce new tissue to the eye, according to a press release. Other researchers are working to correct different congenital eye disorders using CRISPR.