Go with the (debris) flow 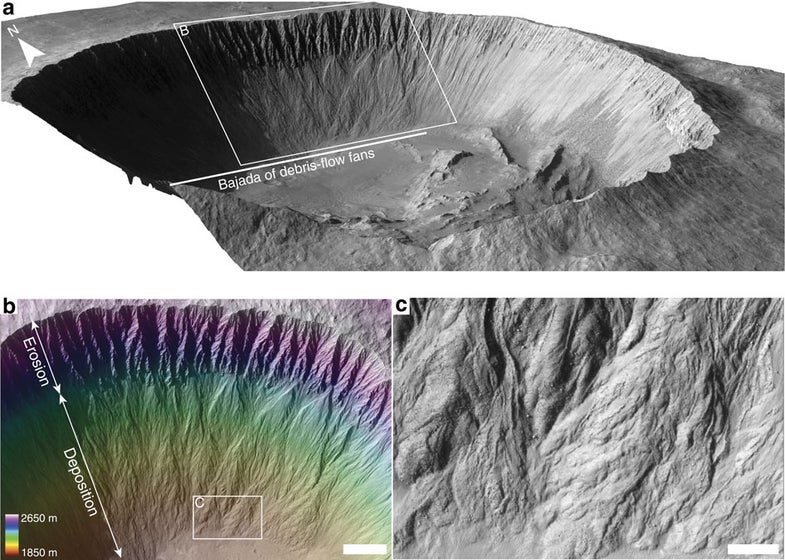 When it comes to space, one of humanity’s favorite pastimes is looking for flowing water on Mars. Scientists pore over the latest dark streaks on the surface analyze meteorites for their water content and check out the latest data from the Mars Curiosity rover, hoping that something might, just might turn up a little bit damp.

Now, new analysis of pictures taken of the Istok crater on Mars adds another bit of tantalizing evidence for water on the red planet. In a study published today in the journal Nature Communications, researchers found that although liquid water on the Martian surface is “extremely rare” today, there might have been water on the surface within the past million years.

They determined that by looking at pictures of the Martian ground taken by the High Resolution Imaging Science Experiment (HiRISE). They found gullies and strange deposits of rocks and soil that resembled debris flows here on earth. On our planet, a debris flow happens when water-soaked ground starts flowing down a slope, carrying rocks and other debris with it. The researchers believe that the water on Mars came from melting ice during one of the planet’s more recent ice ages.

“I was actually really quite surprised to discover the volume and activity of water required to explain the [gullies] and debris in the crater,” one of the authors of the paper, Tjalling de Hass told Popular Mechanics. “The takeaway is that on a relatively recent timescale, there was quite some fluvial activity at certain locations [like the Istok crater] on Mars, at least for short periods.”